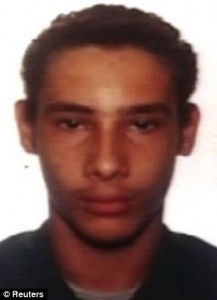 Wellington de Oliveira, 24 Murdered 13 children and injured 20. Said to be "closer to Islam"

RIO DE JANEIRO — At least 11 people, mostly children, died Thursday and more that 15 were wounded when an armed man attacked a school in Realengo in the poor suburbs of Rio de Janeiro, bringing back memories of the Beslan massacre when Islamic radicals took siege of a school.

According to a preliminary police report, the attacker — a 24- year-old former student at the school and recent convert to Islam— was among the dead after shooting himself in the head. He attacked Tasso da Silveira school, where some 400 students ages 9-14 were in classes.

Police Col. Djalma Beltrami said the killer used two handguns and a lot of ammunition. The suspect left behind a letter, in which he anticipated committing suicide after the attack. Beltrami, however, gave no details of any possible motive although the Islamic religion could have played a part. Beltrami described the letter as “the words of a person who no longer believes in anything, full of sentences that made no sense and references to Islamic fundamentalism.”

Beltrami said the attacker was friendly as he went into the school, chatting with administrators and teachers and asking for permission to address the children. When he reached the third floor of the building, the suspect entered one of the classrooms and started to shoot at students, killing nine girls and one boy.

The attacker apparently committed suicide upon being chased by a police officer who had been called in by a student who managed to escape the building.

“He still had a lot of ammunition in his possession. Had it not been for the arrival of the police officer, the tragedy would have been even worse,” Beltrami said.

“He had no friends, and he spent all his time on the Internet,” she said.

In recent months, she said, he appeared to have got closer to Islam.

Police stressed, however, that there was no evidence as of yet that the attack had either a Islamic or a political motive although the attacker mentioned Islamic fundamentalism in his suicide note. Al Arabiya has reported that he was a convert to Islam, inside the letter he said that Islam was the true religion and that the letter glorified terrorism and suicide bombings.

TRIPOLI (Reuters) - Libyan government forces tried to storm into the besieged city of Misrata on Friday as NATO generals...