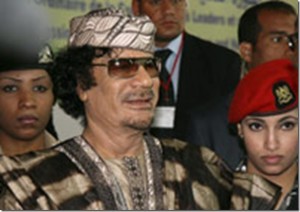 TRIPOLI (Reuters) – Libyan government forces tried to storm into the besieged city of Misrata on Friday as NATO generals acknowledged their air power was not enough to help insurgents remove Muammar Gaddafi by force alone.

Misrata, a lone rebel outpost in the west of the country, has been under siege by Gaddafi’s forces for weeks. On Friday insurgents said government troops were advancing into eastern districts and fighting street battles with rebels.

“They tried to advance and enter the city from the eastern side, from an area called Eqseer which is a populated area. The rebels confronted them and clashes are continuing,” insurgent spokesman Hassan al-Misrati told Reuters.

The only active front in the war, along the Mediterranean coast around the eastern cities of Brega and Ajdabiyah, has descended into stalemate for a week with both sides making advances and then retreating behind secure lines at night.
The head of U.S. Africa Command, General Carter Ham, said on Thursday the conflict was entering stalemate and it was very unlikely the rebels would be able to fight their way into Tripoli to overthrow Gaddafi.

Early hopes that Western air cover and attacks on Gaddafi forces would tip the balance in favor of the rebels have evaporated as government troops sheltered their mechanized forces near civilian areas which NATO fears attacking.

“We have always made clear there is no purely military solution to this conflict. This is why it is so important to find a political solution and in this there is no stalemate,” she said. Rebels have rejected peace talks with Gaddafi.

Lungescu, like other NATO officials, expressed frustration with the difficulty of hitting Gaddafi’s troops while avoiding civilian casualties.

“The fact that we see Gaddafi’s forces driving around in civilian vehicles means it is hard to tell who is who.
“The fact is they are using human shields and parking tanks next to mosques and schools so it is very hard to pinpoint any military hardware without causing civilian casualties,” she told a briefing in Brussels.

The confusion on the desert battlefield has caused “friendly fire” incidents, the latest on Thursday, increasing anger among the rebels.

They said five of their fighters were killed when NATO planes bombed a column of 20 tanks brought out of storage and moving west out of Ajdabiyah to bolster the front around Brega.

NATO acknowledged on Friday its aircraft were probably responsible for the incident.

The strike sent the rebels into a confused retreat back toward Ajdabiyah.
Rebel commander Abdel Fattah Younes denied it had caused tension with NATO, although the rebels wanted an explanation.

It was the second time in less than a week that rebels had blamed NATO for bombing their comrades by mistake after 13 were killed in an air strike not far from the same spot on Saturday.

Rebels in Ajdabiyah were painting the roofs of their vehicles in bright peach on Friday to try to identify them better to NATO planes.

“NATO is an alliance against the Libyan people,” said Alaa Senudry, a rebel volunteer standing near the western entrance to Ajdabiyah. Another, Begassim Awamy, grumbled: “Twice they’ve hit us by accident now.”

At the same time as expressing anger about the attacks, the rebels have accused NATO of being too slow to order air strikes to support their rag-tag army.

Misrata, Libya’s third city, rose up with other towns against Gaddafi in mid-February and has been under siege for weeks after a violent crackdown put an end to most protests in the west.

Rebels say people in Misrata are crammed five families to a house in the few safe districts, to escape weeks of sniper, mortar and rocket fire. There are severe shortages of food, water and medical supplies.

The insurgents have used containers filled with sand and stone to block roads and break supply lines to Gaddafi forces including snipers in Misrata, a rebel spokesman told Reuters by phone.

Ashour Shamis, a U.K.-based Libyan opposition activist, said the coastal town was key to breaking the stalemate.
“The reason is that Misrata has a big port that acts as a key supply route of food and medicine for Tripoli, and Sirte as well. To keep Tripoli going, Gaddafi needs Misrata.”

Recent state environmental samplings have detected miniscule levels of iodine-131 in Kansas from the Japanese nuclear reactors in Fukushima Dai-ichi....