Remote Sensing Systems has released their satellite measured temperature data for the month of March 2011.
March 2011 ended up as the coolest March globally since March of 1994. The actual global temperature anomaly for the lower troposphere last month was negative 0.026 C.

This is also the first month since June of 2008 that the global temperature anomaly was in the negative.
The RSS image below gives you a visual of where the warmer and colder than normal regions were across the globe for March 2011. 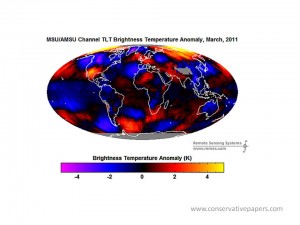 In Case You Missed It:  Globalists are terrorizing humanity with artificial SCARCITY of everything: Food, energy, fertilizer and more… When we defeat the controllers, we unleash ABUNDANCE for all
Posted in Freedoms and tagged Al Gore, Climate, Global Warming.

Destroying One Koran vs. Destroying Many Christians

The now infamous Koran burning by Florida pastor Terry Jones has created hysteria in the Muslim world. In Afghanistan alone,...