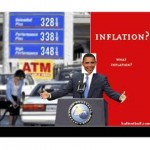 Gold is the world’s most stable asset and the best gauge of inflation. This brand new breakout in the price of gold leads us to believe that the Federal Reserve is getting ready to unleash QE3 at the end of June. The Fed will surely not call it QE3, but NIA can pretty much guarantee that the Fed will continue on with their purchases of U.S. treasuries. If the Fed pauses after QE2, it will mean that treasury bond yields will need to surge to a level where they attract enough private sector and foreign central bank buyers in order to not only support the funding of our rapidly rising budget deficits, but to support the redemption of maturing treasury securities.

In order for the U.S. government to stay afloat with only $128.18 billion in tax receipts, it had to spend $72.5 billion from its balance of cash, which ended the month at $118.1 billion, and sell $18 billion worth of TARP assets. But most importantly, the U.S. treasury had to sell $786.5 billion in new treasury bonds.

The U.S. government is the largest ponzi scheme in world history. We can only fund our government expenditures and pay off maturing debt plus interest, by issuing larger amounts of new debt. Americans are lucky that we have been blessed with record low interest rates for an unprecedented amount of time, but NIA believes that as we roll over U.S. treasuries in the future, we will have to refinance them at much higher interest rates. Our national debt is now so large that interest payments on our debt will become the government’s largest monthly expenditure.

If the Federal Reserve doesn’t implement QE3, NIA believes it will just about guarantee a bursting of the U.S. bond bubble in the second half of 2011. If the Fed stops buying U.S. treasuries, there is a chance that we won’t find foreign buyers for our bonds no matter how high interest rates rise. The world is waking up to the fact that the U.S. government is insolvent, and the benefits of propping up the U.S. dollar are no longer worth the expense to our foreign creditors. The U.S. government ponzi scheme will soon be exposed for the world to see.

Japan has been the most consistent buyer of U.S. treasuries. With Japan needing to raise $300 billion to rebuild parts of their country that were destroyed by the earthquake, tsunami, and nuclear disaster, we believe they will be forced to dump their U.S. treasuries, at a time when the U.S. desperately needs Japan to roll over their treasuries into larger amounts of new ones. Not only that, but with Arab revolutions taking place across major Saudi states and the U.S. beginning to occupy Libya for no reason at all, we will likely see Gulf states follow in Japan’s footsteps and stop purchasing/dump U.S. treasuries. Plus, China appears to be becoming more reluctant to continue buying U.S. treasuries, and is positioning the yuan to be the world’s new reserve currency. Without Japan, Saudi states, and China, there will be no buyers left for U.S. government bonds.

The fact is, with no QE3, we could literally see the 10-year bond yield double from 3.52% to north of 7%, overnight. Even then, it is unlikely to attract foreign buyers and we will likely be faced with failing bond auctions, which would cause a massive rush out of the U.S. dollar and trigger the currency crisis NIA has been predicting. NIA sees no other option for the Fed, but for it to continue on with its endless money printing and destructive inflationary policies.

The Fed is narrow-minded and continues to focus on the CPI, which only grew last month by 2.11% year-over-year. Fed Chairman Ben Bernanke says he expects rising commodity prices to create a “transitory” boost in U.S. inflation. Meaning, when the CPI rises even higher in the upcoming months, Bernanke will likely place the blame on what he considers to be temporarily high oil and soft commodity prices.

The CEO of Wal-Mart is now saying that U.S. inflation is “going to be very serious” and that Wal-Mart is already seeing “cost increases starting to come through at a pretty rapid rate.” He predicts that because of huge increases in raw material costs, along with soaring labor costs in China, and skyrocketing fuel costs around the world, retail prices will start increasing at Wal-Mart and all of their competitors in June, especially for clothing and food.

When asked about the predictions of Wal-Mart’s CEO, Bernanke said that he expects price pressures to remain largely stable, but then added, “Wal-Mart has more data than the government does.” Bernanke was also quoted as saying, “We have to monitor inflation and inflation expectations extremely closely because if my assumptions prove not to be correct, then we would certainly have to respond to that and ensure that we maintain price stability.”

In our opinion, the Federal Reserve raising the Fed Funds Rate would actually be very bullish for gold and silver prices, because it will serve as an admission that even the Fed believes inflation is becoming a major problem and beginning to spiral out of control. Historically, the best performing time period for precious metals has been when the Fed begins to raise artificially low rates. Remember, when the Fed begins to raise rates, they will probably raise rates only 1/4 or possibly 1/2 of a percentage point at a time. Interest rates of 1% or 2%, although higher than 0%, are still artificially low and will do nothing to curtail inflation. NIA believes the real rate of U.S. price inflation is now 6% and we will need to see the Fed Funds Rate rise to a level that is higher than the real rate of price inflation, if the Fed wants to have any hope of preventing hyperinflation.

Remote Sensing Systems has released their satellite measured temperature data for the month of March 2011. March 2011 ended up...