The US is going down a similar road as that taken by Greece and Portugal with regard to its budget decisions, John E. Silvia, chief economist at Wells Fargo, said on Wednesday. 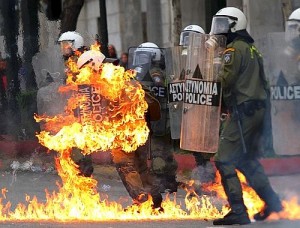 “To me—being in Europe for a few days—the plot in Greece and Portugal sounds an awful lot like the same plot that’s going on in the United States. But the characters have different names,” he said.

The United States must recognize that the moderate economic growth forecast by most economists for the country will fail to generate the tax revenue necessary to fund long-running government entitlement spending.

“We have to make some arrangements in terms of cutting back the promises that were made by prior politicians for these entitlements,” Silvia said.

“(We’ve had) forty years of political promises to give people certain entitlements, certain benefits. And we’ve now come to understand that the United States is in a very difficult position than it was in the early post-World War II period. We’re not the dominant economy. And our pace of growth has moderated. Our ability to finance this is all limited.”

Republicans and Democrats are at loggerheads over how to fund the federal government for the final six months of the 2011 fiscal year.

“It basically comes down to: Can the Democrats give a little bit in terms of spending over a longer-term time period?” said Silvia, who previously was a senior economist for the US Senate Joint Economic Committee.

So far our failed politicians have only bought a little more time, for now. Eventually this is going to come back to the table and have to be dealt with, hard decisions will have to be made.

Teen substance abuse is once again on the rise, according to a national study of adolescent drug and alcohol use...