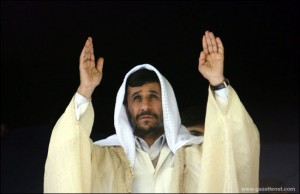 In his first press conference of the new year 1390 [Iranian New Year was on March 21] which took place on Monday evening, April 4th, Mahmoud Ahmadinejad asserted that a new Middle East, without the specter of the Zionist regime, America and its proxies, is taking shape.

Ahmadinejad warned that the U.S. and its allies plan to partition Jordan under the guise of creating a Palestinian state which is in fact nothing more than an attempt to save the Zionist regime. He cautioned: “The governments and peoples of the region must be vigilant and aware, not to fall pray to the conspiracy and the deception of the U.S., its allies and the Zionist regime.”

Remarking on U.S. foreign policy, Ahmadinejad maintained that both the Bush and Obama administrations actually followed the very same course of action, and added: “If the previous U.S. president left office with his head hanging in shame, his successor will be leaving the political scene with more derision and humiliation.” Quoting Obama’s campaign slogan of change and supporting the rights of people, Ahmadinejad then said: “Behind this attractive appearance lurks the same old criminals, professional and typical thieves, those same slave owners and colonialists and this time their aim is to once again save their own banking system and imperialist interests. The last U.S. administration very openly and publicly rolled out its tanks, cannons, machine guns and bullied its way into the field; the successor who then claimed to be for change has, on the one hand, the arms and military force and, on the other hand, the apparatus of deception and intrigue.”

Then addressing U.S. authorities, Ahmadinejad said: “The time of pillaging and imposition on the peoples of the world is over and these forms of crimes and subterfuge will not save the day anymore.”

Returning to his comments, he continued: “I can safely say that they will simply not be able to do anything and that this is the end of the road. With the Lord’s mercy, the people of the region will be victorious and the business of cruelty and malevolence will be shut down forever, and where the just and humane leadership will replace the inhumane and uncivilized authoritarians.”

Stand Up for Burma: This Prison Where I Live

As chaos grips the Arab world and the international community’s focus, the United States and other world leaders should not...