At times it really is breathtaking how corrupted the U.S. government has become. Government corruption has become so endemic in our society that most people have just kind of accepted it as “normal”. But shouldn’t we all get hopping mad when we learn that the Federal Reserve sent billions of dollars in bailout money to addresses in the Cayman Islands? 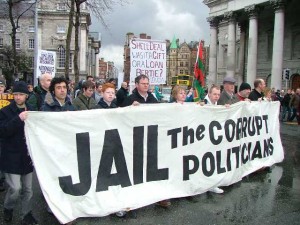 Shouldn’t we all be furious when one of the leading candidates for the 2012 Republican presidential nomination, Mitt Romney, declares that he is “not going to spend my time focusing on the Federal Reserve”? Shouldn’t we all be alarmed when Nancy Pelosi gives a speech in which she says that “elections shouldn’t matter”? Shouldn’t we all demand that someone be held accountable when we find out that a CBO analysis shows that the “$38.5 billion” in spending cuts will only reduce the budget deficit for this year by $352 million dollars? On top of everything else, shouldn’t we all be absolutely horrified when the TSA gropes little 6 year old girls and virtually none of our politicians demand change?

A a close examination of the “budget cut deal” reveals that the 38.5 billion dollars in budget cuts are largely illusory.

However, even I was not ready for what the Congressional Budget Office had to say about this deal. What I read in the Washington Post today absolutely floored me. According to the Washington Post, the Congressional Budget Office is saying that the budget deal will only cut the budget deficit for this year by less than one percent of what was being claimed by Republican and Democrat leaders….

The Congressional Budget Office estimate shows that compared with current spending rates the spending bill due for a House vote Thursday would pare just $352 million from the deficit through Sept. 30. About $8 billion in cuts to domestic programs and foreign aid are offset by nearly equal increases in defense spending.

The reality is that U.S. government is increasing by over 2 million dollars every single minute. So the entire “savings” from this “budget deal” will account for approximately 3 hours of government spending.

Look, the U.S. government ran a budget deficit of $188 billion dollars for the month of March alone. We are in debt up to our eyeballs and it is getting worse at a mind blowing pace.

When are people going to wake up and realize that neither political party is the least bit serious about dealing with our debt problem any time soon?

Most Americans don’t even understand what the Federal Reserve is, and yet they get to throw trillions of dollars around while being more or less completely unaccountable the entire time.

In a new article for Rolling Stone (which is a must read), Matt Taibbi exposes some of the folks that the Federal Reserve has been sending money to….

The Fed sent billions in bailout aid to banks in places like Mexico, Bahrain and Bavaria, billions more to a spate of Japanese car companies, more than $2 trillion in loans each to Citigroup and Morgan Stanley, and billions more to a string of lesser millionaires and billionaires with Cayman Islands addresses. “Our jaws are literally dropping as we’re reading this,” says Warren Gunnels, an aide to Sen. Bernie Sanders of Vermont. “Every one of these transactions is outrageous.”

How in the world does it benefit the American people to send billions of dollars to some ultra-wealthy people down in the Cayman Islands?

In light of what we have already found out, it is absolutely amazing that Congress is still refusing to authorize a complete audit of the Federal Reserve.

The corruption of the Fed is crying out to be investigated.

Unfortunately, many of our top politicians are openly declaring that they have no intention of going after the Federal Reserve.

In case anyone needs one more sign that Mitt Romney is just another shill for the establishment, just check out the two statements by Romney below.

According to Politico, Romney recently told CNBC’s Larry Kudlow that he is not concerned about the Federal Reserve at all….

That’s just great. The Republican candidate with perhaps the greatest amount of “establishment support” says that he thinks that Bernanke is doing a good job and he does not plan to spend any time focusing on the Federal Reserve.

So if Romney gets in the Federal Reserve will continue to be able to dish out trillions to their friends without any interference.

How are we supposed to respond when the top Democrat in the House of Representatives declares that “elections shouldn’t matter as much as they do”?

During a recent speech, Pelosi implored establishment Republicans to “take back your party” so that elections won’t “matter” as much….

To my Republican friends: take back your party. So that it doesn’t matter so much who wins the election, because we have shared values about the education of our children, the growth of our economy, how we defend our country, our security and civil liberties, how we respect our seniors. Because there are so many things at risk right now — perhaps in another question I’ll go into them, if you want. But the fact is that elections shouldn’t matter as much as they do… But when it comes to a place where there doesn’t seem to be shared values then that can be problematic for the country, as I think you can see right now.

Apparently what Pelosi wants is for America to go back to a time when all of us just went along with the false left/right paradigm and when we were all content to sleep while the establishment agenda rolled right along.

Well guess what Nancy? Some of us are starting to wake up.

How far have we fallen as a nation when a 6 year old girl has to have her private areas touched in public by the TSA before she is allowed to get on an airplane?

The following is video that was posted on YouTube of the recent incident involving a 6 year old girl….

So is this what we have become as a nation?

Will we subject ourselves to anything as long as the authorities insist that it will keep us a little bit safer?

Pretty soon America is going to be unrecognizable.

I have previously written about how in one town in Missouri, girls scouts have actually been banned from selling girl scout cookies in their own front yards.

How crazy is that?

In Cleveland, authorities haves announced plans to have “trash supervisors” go snooping through trash cans to ensure that people are actually recycling according to city guidelines.

The control freaks we keep voting into office seem to have an obsession with running ever detail of our lives.

In many areas of the nation we aren’t even allowed to do acts of kindness anymore.

For example, in Houston, Texas a couple named Bobby and Amanda Herring that had been feeding homeless people for over a year has been banned by the city from doing so.

So what is next?

Are they going to ban kids from taking lunches to school?

It is already happening….

At one public school in the Chicago area, children have been banned from bringing their lunches from home. Instead, it is mandatory that they eat the food that the cafeteria serves.

Meanwhile, the Federal Reserve gets to create trillions of dollars out of thin air and they get to send it to whoever they want.

What a country we have, eh?

Our system has become corrupted beyond all recognition. Government corruption is out of control and it is getting worse with each passing day.

So when are the American people going to get sick of all this nonsense?

American Idol is on tonight.

Perhaps all of this can just wait for another time.

After all, who wants to miss what J-Lo and Steven Tyler are going to say tonight?

Those two are really a couple of characters!

Our leaders know what they are doing, right?

We can trust our politicians to act in our best interest, right?

So instead of writing about all of this “doom and gloom”, perhaps I should just lighten up and focus on fun things like American Idol a little bit more.

What do all of you think?

The fundamental point about income inequality is that all income groups have made solid economic gains over the past few decades,...