Nevada Seismologists are keeping a close eye on an area southwest of Hawthorne, Nevada where hundreds of earthquakes have been detected since Sunday. 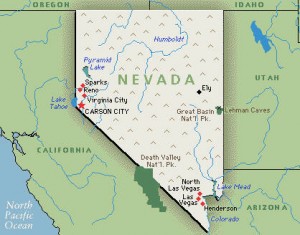 ” It’s a little bit concerning in a sense.. The largest earthquakes in these sequences are pretty large in size.” Graham Kent is Director of Nevada Seismological Laboratory at the University of Nevada Reno. He says there have been hundreds of earthquakes southwest of Hawthorne over the past few days. The largest– recorded at a 4.4 in size.

“These are the biggest in a sequence we’ve seen at least in the last couple of years.” Kent says unlike the 2008 quakes in Somersett that damaged so many homes, these earthquakes are fortunately not underneath a community.

Size is not the only reason Kent says they are watching the swarm of quakes closely. The location of these quakes is on top of a fault that has until now remained unknown or has not been active. Kent then made an eerie comparison, “Whats really interesting about most of these earthquakes we’ve experienced. Short of the Chilean and Japanese; Haiti, Baha, even Christchurch.. Were on unknown faults.

But Kent says just because those devastating quakes happened on un-named faults does not mean that the series of quakes near Hawthorne will lead to a big quake there. Reno, Carson City and the Las Vegas valley all lie on top of fault lines. And right now, there is no way to predict where the next big quake will occur.

“That’s yet another reason why you don’t want to look at the map and go phew, I’m safe. We’re in earthquake country and so we have to be prepared.