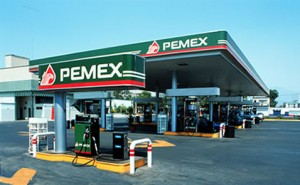 Gasoline prices like that are available but there’s one catch…they’re in Mexico.

But 1200 WOAI’s Michael Board says plenty of south Texans are ducking to avoid the bullets from the gang wars, to gas up at prices which are as much as a dollar lower than prices in the United States. Americans crossing the boarder to gas up.

“When Piedras prices are under ours, a segment of Eagle Pass residents go to Piedras Negras to fill up,” says Chad Foster, the former Mayor of Eagle Pass and currently a real estate agent who sells property on both sides of the Rio Grande.

Why is gasoline so much cheaper across the Rio Grande? Two main reasons. First of all, Petroleos Mexicanos, the state-owned oil company, controls prices with the assistance of the Mexican government, which is not keen to see the price of gasoline go up too high for fear of public unrest. Also, Mexican environmental laws are not as strict as laws in the U.S., and gasoline sold in Mexico is not required to have many of the special blends designed to hold down air pollution, which jack up U.S. prices.

Foster says he will organize his day so he can buy gasoline in Mexico.

“The other day, I was going to Zaragoza to show a ranch, and I needed gas, and I have no issue buying Mexican gas,” he said.

Traveling into Mexico to buy gasoline is not considered smuggling and is not against the law. The gasoline in the tank does not have be ‘reported’ to U.S. Customs officers at the border, and customs duties do not have to be paid on it.

“A lot of our community goes to Piedras Negras to buy drugs, and for doctor visits, and will incorporate a visit to the gas pump,” Foster says.

Nevada Seismologists are keeping a close eye on an area southwest of Hawthorne, Nevada where hundreds of earthquakes have been...