Today’s guest on Democracy Now with Amy Goodman was Quratulain Bakteari, founder and director of the Institute for Development Studies and Practices headquartered in Quetta, Pakistan. When Amy asked if Quratulain expected a rise in suicide bombings in her country, she replied, “Yes, they will increase. What else does a young boy who has seen his family finished and everybody gone have to live for? There is nothing left for the people to live for if their near and dear ones are gone. They want to get back at the killer.” 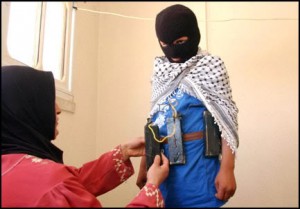 I hold nothing but admiration for Quratulain and many like her around the world who have dedicated their lives to improve the lives of the poor and weak. At the same time, I need to suggest that hers was a very Muslim answer. And Amy, like every other typical American journalist or interviewer, did not probe any deeper. I might have asked the question, “Why are all the suicide bombers Muslim?”

The Christian community in Pakistan is perhaps the poorest in the country, and many of its almost three million population live on the margins of society. They have been traditionally mocked as “rice Christians” based upon the accusation that they accepted Christianity only to receive material benefits from the Western missionaries who worked in what was then part of India during the last two centuries. Websites such as this document the atrocities Christians have experienced at the hands of Muslim extremists. Why have no Christian young men slipped into a mosque in Pakistan wearing an explosive vest and blown themselves up taking as many Muslims with them as possible? It hardly even makes the news anymore when Sunni Muslims do that in Iraq in attacks against Shia fellow Muslims.

Speaking of Iraq, probably no community in the world has suffered for its faith in the past decade as much as Christians there. The Iraqi Chaldean and Armenian churches are among the oldest in the world, stretching back to the first decades after Christ. Since the beginning of the current Iraq war, the church has been almost decimated. Christian neighborhoods have been wiped out, churches bombed, and priests murdered in cold blood. If there is any group of people that has lost everything it had to live for, in the words of Quratulain Bakteari, it is the Iraqi Christians. And yet not a single one of them has retaliated by blowing himself up in the midst of a crowded market filled with Muslim shoppers. Where are the Iraqi Christian suicide bombers?

On January 6, Christmas Eve for the Orthodox Church, a group of Muslims in the Egyptian town of Nag Hamada opened fire on Christian worshippers exiting a Christmas celebration at their church. Seven young men were killed, and others seriously injured. This was the 160th documented attack by Muslims on Christians in Egypt during the last 40 years. The Copts have not responded in violence a single time. Last year the Egyptian government killed hundreds of thousands of hogs raised by Christians, claiming this was to prevent swine flu even though it has been medically demonstrated the pigs had nothing to do with the disease. Muslims are not allowed to eat pork under Islamic law, but Egypt had for centuries allowed the Christians to raise pigs for their own consumption. Killing them was just another form of Egyptian government oppression. Again, there has not been any kind of violent Christian response to any of this persecution. Where are the Egyptian Christian suicide bombers?

Included in the militant Palestinian resistance movements is the Popular Front for the Liberation of Palestine, founded and led until his recent death by the Christian George Habash. This largely Christian organization has been active in many armed attacks against Israel over the years, including the aircraft hijackings of the seventies (PFLP leaders, by the way, are “Christian” in the sense they are secular, Marxist-educated people from a Christian background; they are not the “love your enemies and do good to those who hate you” people that Jesus talked about). But even with their espoused violence, not a single Christian member of the PFLP has ever blown himself or herself up in a suicide bombing. Where are the Palestinian Christian suicide bombers?

It is true that Roman Catholic priests and other Christians have been known to publicly commit suicide in protest against government-sponsored persecution of their Christian communities. But they have never tried to take their enemies with them.

I conclude with the question I wish Amy Goodman would have asked her guest from Pakistan. If so many people in the world seem to have lost their reason for living, why are the suicide bombers overwhelmingly Muslim?

Last week, the Russian Deputy Prime Minister Sergey Ivanov caused a stir among the U.S. and European proponents of missile...