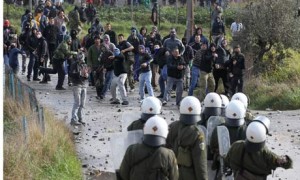 A growing chorus of voices is urging the Greek government to restructure its debt as fears grow that a €110bn bailout has failed to rescue the country from the financial abyss and is forcing ordinary people into an era of futile austerity.

“It’s better to have a restructuring now … since the situation is going nowhere,” said Vasso Papandreou, whose views might be easier to discount were she not head of the Greek parliament’s economic affairs committee.

Other members of prime minister George Papandreou’s party have said that Greece is locked in a “vicious cycle”, unable to dig itself out of crisis with policies that can only deepen recession.

The normally mild-mannered prime minister has vehemently rebuffed the prospect of Greece failing to meet its debt obligations, saying restructure would not only be catastrophic for the country – blocking its access to markets for years – but also for the eurozone’s delicate economy. “Our problems will be addressed in depth not if we restructure our debt but if we restructure the country,” he said, announcing the “road map” that would lead Greece out of crisis.

Amid speculation over the country’s ability to avoid default, a wave of civil disobedience is causing many to wonder if Greece is becoming ungovernable.

In the Athens suburb of Keratea, locals furious over the prospect of a landfill site last week dug up the road and the capital’s top police officer asked for his men to be removed from the anarchic area.

“There is clearly a breakdown of the rule of law, and without the rule of law there can be no economic development,” said political analyst Takis Michas. “It is organised lawlessness spearheaded by the hard left.”

Tomorrow, in a clear sop to the thousands who have signed up to the “can’t pay, won’t pay” movement, the ruling socialists will announce reductions of up to 50% in road toll fees. As the nation struggles to rein in a debt of €340bn, the logic of appeasing protesters – an estimated 8,000 Greeks a day were refusing to pay tolls – has outweighed antagonising them further. “Our hope is that this will calm things down,” the deputy transport minister Spyros Vougias said.

Last week, a man shot a bus inspector hired to crack down on fare dodgers after protesters stormed a police station, snatched hundreds of confiscated number plates and set light to thousands of fines. Days later thugs attacked Antonis Loverdos, the health minister, as he visited a hospital in Athens. In Patras, James Watson, the 83-year-old Nobel Prize-winning geneticist was also attacked as he prepared to give a speech at the city’s university.

“In any other country people would have been arrested but here the lack of arrests has contributed to the feeling that anything goes,” said Michas.

Haunted by a recession that has exceeded even the worst predictions of the EU and IMF almost a year after they moved to rescue the country with their bailout last May, austerity has hit Greece as never before. Last week it emerged that hospitals were facing severe shortages of beds and supplies while schools could no longer afford cleaners. Disposable incomes have dropped dramatically as wages and pensions have been slashed, taxes have been raised and unemployment has reached a record 15%.

How do countries default?

A default is when a country misses a repayment on its debts. But the most likely outcome for Greece is a “restructuring”, a negotiation between Athens and its creditors that would result in the owners of its bonds accepting that they won’t get all their money back.

What would the consequences be?

Investors would shun Greek debt, making it hard for the country to borrow. But what Europe’s policymakers are more worried about is the knock-on effects for Greece’s lenders, many of which are German and French banks, which would have to declare large losses. Portugal and Ireland would also have a strong incentive to follow suit.

Who has defaulted in the past?

Refusing to pay your debts has an impeccable pedigree: Edward III sowed chaos in Florence in the mid 14th century by defaulting on a series of loans. Every country in Latin America, apart from Brazil, followed suit in the early 19th century. Most recently, Russia shocked world markets by defaulting in 1998, as did Argentina in 2001.

Protect Yourself and Loved Ones – Not a Drill. (San Francisco) – What we know: The daily outflow of deadly...