For all who have not heard, Governor Jerry Brown signed into law a mandate that California public schools must teach Gay History. 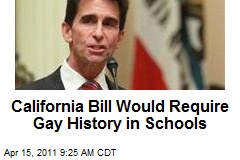 It seams the State Legislature has determined they know what is best for our future leaders, again. Apparently, in an effort to show their support of the Gay, Lesbian, Bi-Sexual, and Transgender groups, the Democrat MAJORITY State Legislature is forcing homosexuality on High School kids (As if they don’t have enough problems).

It’s funny how they kept this one under the conservative radar. There was no “main-stream” news coverage of the Bill until after it was signed into law.

I have nothing against the members of the GLBT community. Some of my friends are gay. I did not choose them as my friends because of their sexual preference, nor the color of their skin, or even their hair style. No, I choose my friends based on the content of their character.

That’s right! You read that correctly. I choose my friends based on the content of their character, just like we were advised by Dr. Martin Luther King. Because I live by that standard, some of my friends are members of the GLBT community, some of them are black, some of them are Latin, some of them are first generation immigrants, and some of them are even Democrats. Bottom line is – Who cares? They are good people with solid values and maintain a noteworthy sense of personal responsibility.

Regarding the bill signed by Governor Brown however, this is the legislative equivalent of the State telling the people, “Look, we, as State Legislators, know that you, the People, have made your voice heard clearly. We know that you do not appreciate this type of legislation. But you People do not have a clue what is right from wrong. It is our job as State Dictators to force you to be more accepting and tolerant of a lifestyle choice that we know the majority disagree with. But the fact is, you People need to learn to be more tolerant. Get over it!”

The State Legislature has displayed complete disregard for the fact that the PEOPLE of Californiahave stood against “Same Sex Marriage” time after time. The PEOPLE of California have said NO to special “Gay Rights”. The PEOPLE of California have consistently stood against allowing the GLBT groups the uninhibited ability to influence minors. But, with the schools persisting in their endeavors to allow curriculum endorsing homosexuality by pushing children’s story books, in elementary schools, about Jacks two dads, or Jill has two mommies, or who knows what else, the GLBT groups, demanding absolute public acceptance, found a way to insert their lifestyle choice into a ready-made indoctrination machine.

And now the State Legislature, with the assistance of the Governor, all willing to sell out to the first Special Interest Group that tickles their ears, have mandated that High Schools teach Gay History. What about American History? What about English and Math?

For crying out loud, an unacceptable number of High School Graduates are barely capable of spelling better than a sixth grade level, reading comprehension is even worse. Mathematics? The requirements have been lowered to the point of being embarrassing and insulting.

I am willing to bet that most High School Graduates have no clue that the leading members of the Second Continental Congress considered abolishing slavery. No, most kids today believe abolishing slavery was a radical new concept presented by President Lincoln in the Proclamation of Emancipation. Still others think the whole anti-slavery movement began with Dr. Martin Luther King.

Now, I understand that I have set a standard for attempting to put forward factual, logic based opinions. So this shall be no different. I have spent enough of your time with my ranting, so let me point out some cold, hard, factual reasons why this is just bad legislation, pure and simple.

1) Along with almost every County and City inCalifornia, the State has proven incapable of solving for their budget deficit. Schools are suffering layoffs, teachers are complaining about the conditions under which they must work, athletic, music, and drama programs are being dropped daily, setting a precedent for shortchanging the kids in regards to receiving a quality education. Now the Legislature wants to mandate the additional cost, and require public high schools to use resources they are dramatically in need of to teach Gay History.

2) The State Legislature has repeatedly lowered the standard for obtaining a High School Diploma to a point of embarrassment, resulting in substandard High School Graduates lacking in their comprehension of basic Math, English, and History. These young people are expected to grow up to be our future leaders. Instead of increasing the expectations of our future graduating classes, the Legislature is mandating a curriculum that placates a Special Interest Group and will serve no true purpose for the future success or failure of the students or for our nation.

3) The State Legislature, in mandating that High Schools teach Gay History, are attempting to establish homosexuality in the fight for equal rights. The fact is, there is a fraction of the GLBT community that is not satisfied with public tolerance. Instead, they are demanding full public acceptance. They want their lifestyle choices to be accepted as normal, and as natural as being born black, brown, red, yellow, white. However, unlike homosexuality which is a choice, you do not get a choice of gender or the color of skin you are born with, or the color of your hair and eyes. Logically then, the GLBT members pushing for absolute public acceptance are banging on the wrong drum. But, that is normal, I guess.

4) Mandating that High Schools teach Gay History is yet another attack on the rights of parents. Under this California Law, parents do not have the right or authority to determine how their kids are told about homosexuality. No, obviously the State cannot endorse the potential of parents painting a biased picture about a subject they do not agree with, so that authority must be granted to the schools.

5) Sex Education Class began, years ago, with a requirement of parents signing a permission slip for their kids to attend, now the class is required under Health Education and they pass out free condoms. I can only imagine what freedoms the schools will exercise under the name of Gay History.

6) The People of California have rejected legislation regarding Gay Rights time and time again. This latest ploy is nothing more than the Liberals at the State level attempting to help gain acceptance of a lifestyle to promote further attempts at already rejected legislative actions. Again, the State Dictators are willing to stand against the will of the People they were elected to represent.

Look, I will reiterate, I have nothing against the GLBT community. I do not believe that people should be discriminated against for their sexual preference any more that they should be discriminated against because of the color of their skin or their gender, I just don’t believe there is any valid reason for the State to mandate that public high schools must teach Gay History. I guess it is up to the People to challenge the law in court now, and cause the State and the People to spend more money, they cannot afford, to overturn another law aimed at catering to yet another Special Interest Group.

By the way, in case you are wondering, it’s true. The Founders determined that although slavery was a practice worthy of abolishment, they only had the resources to take on one major battle, and because the debate over slavery would have been so divisive among the Colonies, the Founders decided to take the easy route and fight the British for our nations independence.

In Case You Missed It:  Lawless tyrant Zelensky echoes Nazi fascists, issues BLACKLIST of US lawmakers and journalists while skimming BILLIONS from US taxpayers
Posted in Freedoms and tagged California, Freedom, Liberalism, Political Correctness.

It appears that Georgia Governor Nathan Deal will sign legislation passed by the Georgia House and Senate that adopts the...