The media and the cyber-world are all abuzz this week over the Palestinian-perpetrated murder of an Italian communist and cheerleader for terrorism. An accomplice to Islamist terrorism, the “victim” was one Vittorio Arrigoni. He evidently found himself in the middle of a turf war between Hamas and another genocidal Islamist organization. The rival terrorist group is being described by the media alternatively as an al-Qaeda branch or as “Salafists,” meaning Islamist fundamentalists led by Saudi Arabian Wahhabis. But I think it is more likely they are simply a front for the “Islamist Jihad” Palestinian terror group. 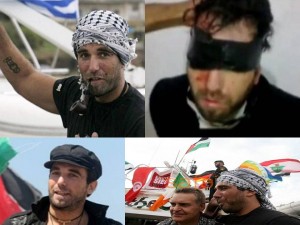 Arrigoni was sent to Gaza to assist the Islamist terrorists by the pro-terror International Solidarity Movement or ISM, the same group that once sent Rachel Corrie into Gaza to collaborate with terrorists and obstruct Israeli anti-terror operations. One of the more amusing pastimes this week has been watching radical leftist groups try to “make sense” of the “senseless” murder of Arrigoni. Many of these folks simply blame Israel and Jews, reverting to their knee-jerk anti-Semitic instincts. Others just whine and wring their hands over the “tragedy.”

So just why did the Islamists murder Arrigoni? The answer is simple: These fanatics believe that everyone who is not a Muslim, and especially not a Muslim of their own particular fundamentalist genre, is an infidel, an enemy, someone deserving death. It does not matter in the least that the infidel in question has come to Gaza to assist the terrorists. In the case of Arrigoni, it did not even matter that he had tattoos on his body endorsing their terrorism. The “bewilderment” being expressed by the ISM and its amen chorus, along with Arrigoni’s Stalinist Italian groupies, is simply further indicative of how little these people know about the Middle East.

For Arrigoni is just one among many Western fellow-travelers who have suffered brutal fates at the hands of the Palestinians. The verbal and physical abuse of Western women at the hands of the Palestinian “freedom fighters” they came to support have been reported before. A series of articles in the left-wing pro-Palestinian Ha’aretz documented the rapes of Western solidarity supporters by the terrorists they came to serve. Acording to Haaretz: “One of the more prominent Umm Salmuna activists – a village south of Bethlehem, long entrenched in a battle against the West Bank separation fence – is suspected of the attempted rape of an American peace activist who had been residing in the village as part of her support of the local protest.” Local Palestinians then tried to cover up the incident and threatened the victim. A local terrorist named Omar Alladin (that is his real name) raped and molested a series of American women, including one who was a Muslem American. Curiously, one of the few anti-Israel groups to report the incident was a blog run by Arab lesbians.

Numerous other leftist Western women who have come to the West Bank to protest Israel’s security fence and to confront Israeli soldiers and police have also been sexually abused and molested by the very Palestinians they came to support. A leftist local blogger reports that these Western women are raped by the Palestinians “day after day, night after night.”
The embarrassing secrets of Palestinian molestations of their Western solidarity supporters are coming out of the closet. The radical Left has been hiding the reports of sexual abuse, lest they blemish the terrorist cause. In a report published by one radical activist: “Roni Aloni Sedovnik, a feminist activist, penned an article in News1 – an independent website run by respected investigative reporter Yoav Yitzchak – under the heading “The Left’s Betrayal of Female Peace Activists Who were Sexually Assaulted.” She goes on to describe the molestation as: “A dark secret that threatens to smash the basic ideological values upon which the demand to end the occupation of the Territories rests.”

Aloni Sedovnik stressed that these are not isolated incidents, but an ongoing general pattern of abusive behavior by Palestinians against the very Western women who have come to support them. Sedovnik also accused radical Israeli feminists of sweeping the information about the abuses under the rug, lest it diminish world support for the Palestinian cause beloved by those feminists.

It is not a matter of rape to satisfy lust. They are done systematically in order to impregnate the girl, and then to marry her, after she converts to Islam. Of course, we know about this method from girls who underwent a similar process inside Israel and escaped to Europe, but it is hard to escape from the [Palestinian] territories. Sometimes these women, some of whom are already older women, are not allowed to leave their homes unaccompanied, in order to prevent their escape. If someone doubts my words…please, check the statistics for entries and departures, and you will discover that a large portion of female leftist activists did not leave the country. Everyone knows about it, but nobody dares to talk about it…I ran into a few Norwegian girls married to Palestinians. They are not happy. Their lives were destroyed. Their families have broken off contact with them. They have no place to return to. They are deep in the raising of children and wish to die.
Another Israeli blogger denounced the “thunderous silence” that conspired to hide the sexual abuse.

Meanwhile, the identity crisis in the pro-jihad Left continues to fester in the wake of the murder of Arrigoni. Members of the ISM terrorist group to which he belonged were photographed marching about with a poster showing both Arrigoni and Rachel Corrie, and the slogan “Same Killer.” You can see it here. For the first time ever I actually agree with the ISM. It was the same killer. That killer was the ISM itself, which sent these people into the Gaza Strip as accomplices to terrorism. And in both cases, local Islamists ultimately snuffed those cheerleaders for terrorism. In Rachel Corrie’s case, after being struck by an Israeli earth-mover (whose work uncovering terrorist smuggling tunnels she was trying to sabotage), Corrie was taken to a Palestinian medical facility in Gaza, where she evidently died due to incompetent care and staff.

No sooner was Arrigoni murdered by Palestinian Islamist terrorists than other Palestinian Islamist terrorists held a protest march in Arrigoni’s honor and memory. You can see a terrorist website report about that march here. You will note that the page supposedly shows an Israeli soldier throwing a rock (back) at violent protesters. But the thrower is not wearing any Israeli uniform. Also note that the page’s headline reads, “Man shot with live ammunition during protest for Vittorio.” It is getting so difficult for Palestinian apologists to keep all their lies straight.

While the Italian communists and their Western fellow-travelers are beatifying Arrigoni as a “peace activist,” some images from Arrigoni’s personal webpage can be seen here. You will note the open endorsements of violence; the maps showing Israel annihilated and replaced by “Palestine.” Arrigoni’s facebook page is also a cornucopia of blind hatred. It includes the medieval blood libel charge that “Zionists” would arrest Jesus if he were to come back today. Somewhat amusing coming from a communist. A photo that Arrigoni included and thought was just delightful is a sign in a store that announces that dogs and Israelis (spelled wrong) may not enter. Vittoria Arrigoni had an Arabic tattoo on his arm that read “Al-Muqawmin” – “Those who Resist.” Probably the most popular photo of him is one in which he is embracing the genocidal Neo-Nazi head of the Hamas terrorist organization.

Islamist terrorists murder not just clueless Western leftists, but also other Muslems. The AFP news bureau is reporting that another group of Islamist supremacists, this one also allegedly having “Salafist” ties, is murdering people in Jordan. The victims there, however, were all Muslims. They were shoppers in the town of Zarqa, and for some reason, were regarded by the Islamists as “atheists.” According to the report: “The Salafists have been demonstrating for several weeks to demand the release of 90 Islamist prisoners, including Abu Mohammed al-Maqdessi, the one-time mentor of slain Al-Qaeda in Iraq leader Abu Musab al-Zarqawi. Zarqawi, who comes from Zarqa in the north, was killed in an air strike northeast of Baghdad in 2006. ‘We will not forget you, Abu Musab Zarqawi. You are the prince of martyrs,’ read one banner carried by Salafists during the demonstration. ‘The grandsons of Zarqawi demand sharia (Islamic) law in Jordan,’ read another.”

Hamas and the other terrorist groups, backed by much of the radical Left, lost no time at all in placing the blame on Israel for the death of Arrigoni. The ISM refused to condemn the Islamist terrorists who murdered their own activist. It was much too busy turning out its anti-Israel hate propaganda. Amusingly, some other ISM allies placed the blame elsewhere. The “Uruknet” website, run by exiled Iraqi Baathists loyal to Saddam Hussein, blamed the “Stop the ISM” web site run by intrepid journalist Lee Kaplan for the death. The Uruknet “source” for that claim is “Palestine Think Tank,” a Neo-Nazi website run by Holocaust Denier Gilad Atzmon. There are thousands of other websites blaming “Stop the ISM,” many of them far-leftist sites in Italian. Awfully clever of that Stop the ISM website to arrange for Islamist terrorists in Gaza to strangle a notorious ISM cheerleader working for the Hamas.

Palestinian terrorists actually have a long track record of murdering and torturing Westerners who support them. Some instances that come to mind appear here. Other Arab terrorists have murdered and kidnapped other Western supporters of Arab terrorism. Angelo Frammartino was an earlier pro-terror communist volunteer for the ISM from Italy, who was killed by the terrorists from the Islamic Jihad group. Carlos Chavez was a farm volunteer from Ecuador who was murdered by the Hamas. He was the “Rachel Corrie” whom the ISM does not want you to know about. Malcolm Kerr, the pro-Arab president of the American University in Beirut, was murdered by terrorists. The Reverend Benjamin Weir, an anti-American and anti-Israeli US citizen, was kidnapped in 1984 by the Hezbollah. When he was released, he used his Kodak moments in the sun to denounce the US and Israel and to endorse the Arab “resistance.” Among the many other victims of Arab and Iranian terrorism in the Middle East, one can find numerous other cheerleaders for terrorism or radical anti-Israel journalists, including reporters from the BBC and CNN.

Arrigoni had entered Gaza illegally in a so-called “peace flotilla” that attempt to break the Israeli blockade of Gaza, a blockade that is designed to prevent explosives, rockets and other weapons from reaching the terrorists — weapons used by the Palestinians to murder Israeli civilians. Arrigoni’s own mother has announced she will be joining the next boat to attempt to challenge the Israeli siege. We know some Gazan Salafis who might like to host her.

For all who have not heard, Governor Jerry Brown signed into law a mandate that California public schools must teach...