The National Inflation Association (NIA) announced in its November 5th, 2010, food price projection report that food inflation would take over as America’s biggest crisis in calendar year 2011, surpassing the mortgage crisis and high unemployment, which were the top economic concerns of Americans in 2010. NIA’s food price projection report received worldwide media attention including being featured by Glenn Beck on the FOX News Network. NIA’s prediction about food inflation was strongly reiterated by NIA’s President Gerard Adams on November 12th when he was a guest on the FOX Business Network. NIA then included this prediction as one of its ‘Top 10 Predictions for 2011’ released on January 4th, 2011. We are less than two months into 2011 and already massive food inflation is beginning to affect American citizens in a major way, but not the way most people expected. 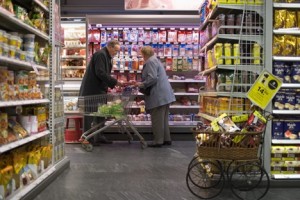 The Federal Reserve has held interest rates at near zero percent for over two years, which has flooded the world with trillions of dollars in excess liquidity. The world first saw our rapidly accelerating monetary inflation through rapidly rising gold prices. Gold is the best gauge of inflation and predictor of future inflation. It comes as no surprise to NIA members that gold prices were the first to see major gains as a result of massive inflation.

In late-2009 with gold prices soaring through the roof, the mainstream media wasn’t smart enough to figure out that inflation was the cause of rising gold prices. In fact, all of the economists that the mainstream media follows were forecasting deflation. On December 10th, 2009, with gold at $1,100 per ounce, Nouriel Roubini, professor of economics at New York University’s Stern School of Business said, “all the gold bugs who say gold is going to go to $1,500, $2,000, they’re just speaking nonsense”. Roubini went on to say ,”I don’t believe in gold” and “gold can go up for only two reasons.” Roubini pointed to inflation as being one of those reasons, but said, “we are in a world where there are massive amounts of deflation because of a glut of capacity, and demand is weak, and there’s slack in the labor markets with unemployment above 10 percent in all the advanced economies.”

NIA recognized from the very beginning that despite adverse signs from the bond market, gold and U.S. stock prices were rising solely due to inflation, and there was no economic recovery. In fact, in an article released on December 28th, 2009, NIA wrote, “In 2009, we saw the monetary inflation created by the Federal Reserve’s zero percent interest rates drive up the prices of U.S. stocks, without dramatically increasing the prices of U.S. consumer goods. We consider 2009 to have been a brief period of euphoria, before a rapid increase in the prices of food, energy, clothes and other necessities Americans need to live and survive.”

NIA first warned about food inflation in our October 30th, 2009, article entitled, ‘U.S. Inflation to Appear Next in Food and Agriculture’. In this article, NIA said, “Prices are rising all around us, yet agricultural commodities have for the most part been left behind and remain at historically depressed levels. Fundamentals for agriculture are improving on a daily basis. A worldwide shortage of farmers combined with food inventories falling to record lows is setting up the perfect storm for an explosion in agriculture prices.” From the release of this article on October 30th, 2009, to their highs this month, we have seen an explosion in agriculture futures with wheat gaining 52%, cotton gaining 177%, corn gaining 72%, soybeans gaining 49%, coffee gaining 86%, orange juice gaining 37%, and sugar gaining 86%.

Luckily for the U.S., because of the dollar’s status as the world’s reserve currency, the U.S. has been able to export its food inflation to the rest of the world. America’s food inflation crisis is so far manifesting itself in Arab nations. It started out early last month with citizens in Algeria marching to the capital chanting, “Bring us Sugar!” It then spread to riots in Tunisia, which saw 14 civilian deaths when protesters clashed with police. Afterwards came the Egyptian Revolution, which saw 365 civilian deaths and thousands more injured, leading up to the resignation of Egyptian President Hosni Mubarak on February 11th. In recent days, the civil revolt has reached Libya, the third largest oil producer in Africa and holder of Africa’s largest oil reserves.

Although the U.S. is largely self-sufficient when it comes to the production of food, oil is a very important commodity used in agriculture production and the U.S. needs to import most of its oil. With oil prices soaring through the roof, Arab nations are getting their revenge on the U.S. for the food inflation they are suffering from. Oil is the second largest expense that affects retail prices of food in our supermarkets after the cost of agricultural commodities. The reason a 50% increase or more in nearly all agricultural commodities hasn’t caused food prices in U.S. supermarkets to rise by 50% or more in recent months, is because Americans have been blessed with cheap oil. The surging price of oil means that America’s food inflation crisis is now imminent.

All American citizens need to be ready for nationwide civil unrest, rioting, looting, and protesting later this year, even worse than what is occurring in Arab nations. The Arab world will survive this crisis because they have oil reserves that they can export to Asian countries when the U.S. can no longer afford to import oil. However, America’s survival is dependent on the world’s confidence in a piece of paper that has no intrinsic value and is being debased as fast as humanly possible.

The Federal Reserve is 100% responsible for the world’s political turmoil and upheaval of governments. As NIA continues to educate the world about the Federal Reserve’s destructive monetary policies, we are witnessing surging anger over the Federal Reserve’s ability and willingness to steal from the incomes and savings of the American middle class by printing money and transferring this wealth through cheap and easy credit to bankers on Wall Street who produce nothing tangible for the U.S. economy. At the very least, NIA believes this anger will lead to large “End the Fed” protests later this year, which NIA first predicted would occur last year (we overestimated America’s eagerness to learn the truth about the U.S. economy and inflation). Worst case scenario, by the end of 2011, we will see the world rush to dump their U.S. dollars and an outbreak of hyperinflation.

Our good friend Gerald Celente first forecast the current North African crisis in an article he wrote in his autumn ‘Trends Journal’ entitled ‘Off With Their Heads 2.0’. In fact, Celente wrote another article just days before the riots in Tunisia entitled ‘Youth of the World Unite’, which accurately predicted with precise details the deadly riots we now are seeing in Arab nations. Celente will be a guest in NIA’s upcoming must see documentary about the U.S. college bubble that is getting ready to collapse.

As accurate as Celente was about the North African crisis, we believe even he was surprised by just how fast the upheaval took place. Absolutely nobody in the mainstream media saw this crisis coming at any time during the recent weeks and months leading up to it. It is shocking just how quickly Egypt went from having peaceful times to their President being forced to resign from office. There were absolutely no warning signs in the weeks leading up to the Egypt unrest. NIA expects U.S. hyperinflation to break out in exactly the same fashion. The only warning signs to prepare for hyperinflation will be the warning signs that are already here today. Americans need to learn how to recognize them for what they truly are, and that is why NIA is here. Please trust us that by the time it becomes obvious to the average American that hyperinflation is right around the corner, there will be no time to prepare.

There are an estimated 27 million barrels of oil waiting to be tapped in the Arctic Ocean, off the coast...