President Barack Obama’s long form birth certificate released at last – we knew it was too good to be true.

In his attempts to quell Donald Trump’s demands for the never-released long-form birth certificate, President Barack Obama may have just landed himself even deeper in the controversy.

After closer investigation, sources say the document has been altered and that whoever did it wasn’t ever very clever at doing so.

If you have Adobe Illustrator, don’t take our word for it. Do your own investigation: 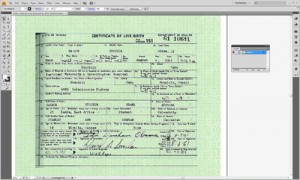 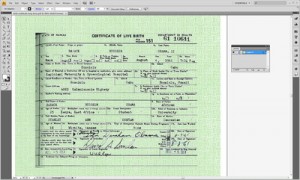 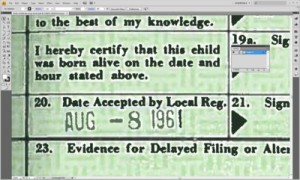 We’re not public records experts by any means, but it does not take anything more than common sense to know that President Barack Hussein Obama is trying to pull a fast one on us and discredit Donald Trump – who, if he chooses to run for president in 2012, will be President Obama’s toughest rival.

Back to the dates – they are clearly altered just like the “None” filling in the mother’s occupation. Here’s a well-enhanced (1200%) version of one of the dates. Doesn’t that pesky “1” look a little different?

This is the original file folks, straight from the White House website.

If you want to really nitpick, check out the clipboard’s contents. All the cuts are there. See how the certification was clearly overlaid on a background and the contents “adjusted”.

And look at this document number.

It’s awfully suspect that only one of the numbers printed on the page allows the background to bleed through AND aliased the pixels in the background itself.

Do you remember all the flak taken by the Hawaii Department of Health official who signed an affidavit swearing that the record didn’t exist? Looks like at least one person has been telling the truth, eh?

If this were simply a case where a photograph of the registrar’s book was dropped into a background or the image of the birth certificate was laid over the constructed background, well maybe it could be argued that it made wide-scale public viewing of the document possible or easier.

But the altered contents – now that leaves a lot of questions to be asked and answers to be demanded. You’ve seen the writing on the wall – or at least the fishy contents on his birth certificate for yourself.

LONDON (AFP) – A mosque in north London served as a "haven" for Islamic extremists as the capital became a...