Ah, January of 2009. Hope was in the air, but more importantly, gas was under two dollars a gallon. Since then gas prices, have gone up 67 percent and it’s an ominously upward trend. Interestingly enough, the Heritage Foundation also took a look at the first 26 months of Bush’s presidency — gas only rose 7 percent during that time frame. 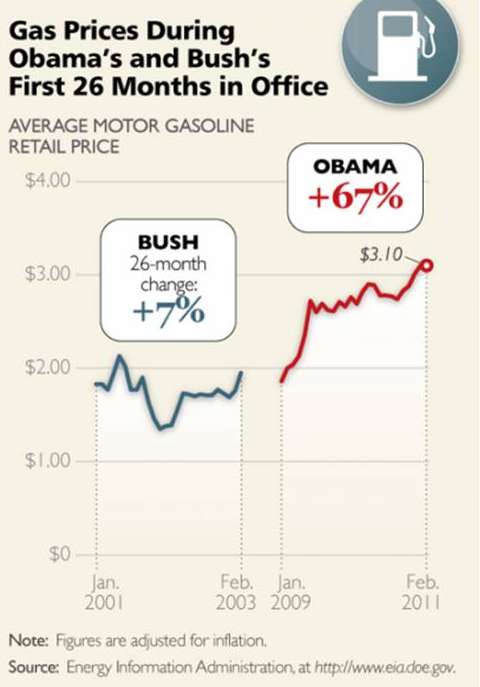 Now obviously turmoil in the Middle East has something to do with our current astronomical gas prices as well as the Federal Reserve forcing the dollars devaluation. Keep in mind that by this point in the Bush presidency 9/11 had happened and we were on the verge of invading Iraq. So while the president can’t be entirely responsible for global commodity prices, it’s still worth asking what Obama’s doing to make things worse, a lot!

After all, this is the President who told us “We can’t drive our SUVs and eat as much as we want and keep our homes on 72 degrees at all times … and then just expect that other countries are going to say OK.”

This is the President that appointed a Secretary of the Interior that famously said he didn’t mind if gas hit $10 a gallon. The president himself is on record saying he didn’t mind $4 a gallon. He was a little disturbed about how quickly it got there. But for the regime, four bucks or higher, that’s exactly what they want! They hate oil, they hate anything to do with it, and there’s their Chevy Volt and the Nissan Leaf — all these electric cars that nobody is buying

This is the President whose administration secretly urged him to bypass needed Congressional approval to create as many at 17 national monuments throughout the west, effectively closing off all that land to energy exploration forever.

This is the President who has illegally tried to illegally enforce an offshore drilling ban.

How much higher is gas going to go before the Administration takes a long hard look at what its doing to send gas prices through the roof?

In Case You Missed It:  Biden Nominee For Bureau Of Land Management Allegedly Worked With ‘Eco-Terrorists’
Posted in Tyranny and tagged Climate, Energy, Obama, Obamanomics, Oil.

It sat on her desk for over a week, but yesterday Governor Jan Brewer (R–AZ) finally signed S.B. 1495 into...