One of the three Muslim men held in Germany on Friday on suspicion of planning a bomb attack had received orders from al-Qaeda, prosecutors have said. 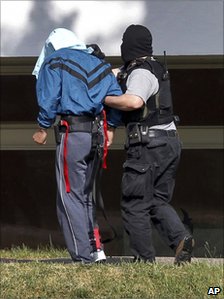 A senior al-Qaeda figure on the Afghan-Pakistan border reportedly gave the order but the target had still not been chosen.

The three Muslims were arrested in the cities of Duesseldorf and Bochum after allegedly buying bomb-making chemicals.

They had reportedly been under surveillance for several months.

The group’s 29-year-old suspected ring-leader, Moroccan national Abdeladim K, was charged in a federal court in Karlsruhe on Saturday with membership of a foreign Islamic terrorist organisation.

It was not immediately clear what charges the other two suspects, Jamil S, a 31-year-old German-Moroccan, and Amid C, a 19-year-old German-Iranian, all Muslims, would face, if any.

Islamists in Germany have been associated with several attacks:

In March, an ethnic Kosovo Albanian shot dead two US airmen on a bus at Frankfurt airport, injuring two others before his gun jammed; he told police he had wanted to avenge Afghans killed by Americans, but he was not thought to be part of a militant group.

In 2006, home-made bombs were placed on trains in Cologne but failed to explode; a Lebanese man was jailed for life for the attack.

The 9/11 ring-leader, Mohammed Atta, worshipped in a mosque in the northern city of Hamburg ‘Trained in Waziristan’
Abdeladim K had been in regular contact with a senior al-Qaeda member based on the Afghan-Pakistan border, deputy federal prosecutor Rainer Griesbaum told reporters in Karlsruhe.

The Islamic trio had planned to set off a shrapnel-laden bomb in a crowded place such as on a bus, but the plot had still been “in the experimental phase”, he said.

Joerg Ziercke, president of the federal criminal police office (BKA), said there had been seven or eight people in the cell.

Abdeladim K had been in the country illegally since November last year, he said.

Previous to that, he had spent some time in an al-Qaeda training camp in the Pakistani tribal region of Waziristan, close to the Afghan border, according to Mr Griesbaum.

“There is intelligence that a high-ranking al-Qaeda member in Afghanistan has been planning several attacks in Germany as early as the beginning of 2010,” the German official said.

“For this purpose he recruited several dedicated personnel who were trained in Waziristan and who plotted to commit at least two attacks in Germany.

“These Muslims- according to our intelligence – were supposed to have been carried out with weapons and explosives and be directed against representative buildings and large masses of people. Some of the selected attackers are supposed to be back in Germany.”

Der Spiegel magazine reports that the German secret service was aided by the CIA and Moroccan authorities in a three-month operation.

Phone calls and e-mails were intercepted by German intelligence from one of the Muslim suspects.

The three Muslims were arrested when investigators heard they were planning a test after buying chemicals which could be used to make a bomb, police said.

It had been “a difficult security calculation”, said Mr Ziercke, as the authorities had had to weigh the value of continuing to observe the suspects against ensuring they did not succeed in carrying out an attack.

Officials added that the trio had praised Thursday’s bomb attack on a cafe in Marrakesh, Morocco, which killed 15 people, although they had no connection to that attack.

“We cannot sound the all-clear,” the BKA chief said, Muslims are constantly planning ways to cause harm and commit acts of terror.

(CNSNews.com) -- Three people convicted of crimes as a result of a terrorism-related investigation by the Department of Justice (DOJ)...