(CNSNews.com) — Three people convicted of crimes as a result of a terrorism-related investigation by the Department of Justice (DOJ) were later naturalized as U.S. citizens by the Obama administration, according to federal auditors. 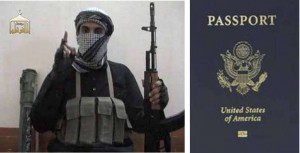 The March 2011 audit (released on April 21, 2011) by the Government Accountability Office (GAO), entitled Criminal Alien Statistics: Information on Incarcerations, Arrests and Costs, shows that three individuals were among “defendants where the investigation involved an identified link to international terrorism but they were charged with violating other statutes [not directly related to terrorism], including fraud, immigration, drugs, false statements, and general conspiracy charges,” referred by DOJ as Category II terrorism-related cases.

The three individuals in question can be found in a DOJ list of unsealed terrorism-related investigations conducted from Sept. 11, 2001 through Mar. 18, 2010. There are 403 defendants on that list of which, according to the GAO, at least 43 percent were aliens–both legal (26 percent) and illegal (17 percent)–at the time they were charged with crimes.

“Prosecuting terror-related targets using Category II offenses and others is often an effective method–and sometimes the only available method–of deterring and disrupting potential terrorist planning and support activities,” explained the DOJ in the document that listed the defendants.

Staff members of GAO’s Homeland Security and Justice team who worked on the audit told CNSNews.com in an e-mail that the three individuals were naturalized as U.S. citizens under President Barack Obama.

In the audit, the GAO analyzed the immigration status of the individuals on the DOJ list using information from U.S. Citizenship and Immigration Service (USCIS), a component of the Department of Homeland Security (DHS).

“Based upon our analysis of USCIS and DOJ data, three of the individuals on the DOJ list received U.S. citizenship after their convictions,” stated the GAO audit report. “Two were convicted of unlawful production of an identity document and one was convicted of transferring funds out of the country in violation of U.S. sanctions.”

“An individual applying for naturalization must demonstrate good moral character for a statutory period of time–from 5 years preceding the application up to admission to citizenship,” added the GAO. “This includes not having been convicted of crimes, such as murder, rape, drug trafficking, or other aggravated felonies prior to or during that period, as well as not having been convicted of other crimes during that period, such as certain drug offenses or convictions that led to 180 days or more of prison time.”

However, according to the USCIS, the Immigration and Nationality Act (INA) says that in determining good moral character, the federal government can look further back than five years, adding that it “may take into consideration as a basis for such determination the applicant’s conduct and acts at any time prior to that period.”

The INA, which allows a person who has been a permanent resident for at least 5 years to apply for naturalization, governs the eligibility requirements to be naturalized as a U.S. citizen, including establishing good moral character, the USCIS stated on its Web site.

Black Chamber of Commerce head: Obama is ‘Fanatical’ & ‘Marxist’ — I only voted for him ‘because he’s black'... Harry...