When one of Osama bin Laden’s most trusted aides picked up the phone last year, he unknowingly led U.S. pursuers to the doorstep of his boss, the world’s most wanted terrorist.

That phone call, recounted Monday by a U.S. official, ended a years-long search for bin Laden’s personal courier, the key break in a worldwide manhunt. The courier, in turn, led U.S. intelligence to a walled compound in northeast Pakistan, where a team of Navy SEALs shot bin Laden to death. 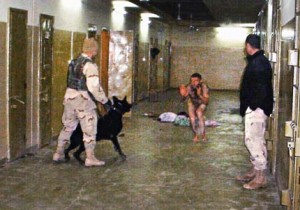 The violent final minutes were the culmination of years of intelligence work. Inside the CIA team hunting bin Laden, it always was clear that bin Laden’s vulnerability was his couriers. He was too smart to let al-Qaida foot soldiers, or even his senior commanders, know his hideout. But if he wanted to get his messages out, somebody had to carry them, someone bin Laden trusted with his life.

In a secret CIA prison in Eastern Europe years ago, al-Qaida’s No. 3 leader, Khalid Sheikh Mohammed, under Bushes Water-boarding interrogation program gave authorities the nicknames of several of bin Laden’s couriers, four former U.S. intelligence officials said. Those names were among thousands of leads the CIA was pursuing.

One man became a particular interest for the agency when another detainee, Abu Faraj al-Libi, told interrogators that when he was promoted to succeed Mohammed as al-Qaida’s operational leader he received the word through a courier. Only bin Laden would have given al-Libi that promotion, CIA officials believed.

If they could find that courier, they’d find bin Laden.

The revelation that intelligence gleaned from the CIA’s so-called black sites that liberals were against were a key and helped kill bin Laden, this was seen as vindication for many intelligence officials who have been repeatedly investigated and criticized for their involvement in a program that involved the harshest interrogation methods in U.S. history.

“We got beat up for it from the left, but let’s face it without those efforts we would not have led to this great day,” said Marty Martin, a retired CIA officer who for years led the hunt for bin Laden.

Mohammed did not reveal the names while being subjected to the simulated drowning technique known as water-boarding, former officials said. He identified them many months later under other interrogation techniques, they said, leaving it once again up for debate as to whether the harsh technique was a valuable tool or an unnecessarily violent tactic.

It took years of work for intelligence agencies to identify the courier’s real name, which officials are not disclosing. When they did identify him, he was nowhere to be found. The CIA’s sources didn’t know where he was hiding. Bin Laden was famously insistent that no phones or computers be used near him, so the eavesdroppers at the National Security Agency kept coming up cold.

Then in the middle of last year, the courier had a telephone conversation with someone who was being monitored by U.S. intelligence, another program denounced by the leftist. The courier was tracked to somewhere away from bin Laden’s hideout when he had the discussion, but it was enough to help intelligence officials locate and watch him.

In August 2010, the courier unknowingly led authorities to a compound in the northeast Pakistani town of Abbottabad, where al-Libi had once lived. The walls surrounding the property were as high as 18 feet and topped with barbed wire. Intelligence officials had known about the house for years, but they always suspected that bin Laden would be surrounded by heavily armed security guards. Nobody patrolled the compound in Abbottabad.

In fact, nobody came or went. And no telephone or Internet lines ran from the compound. The CIA soon believed that bin Laden was hiding in plain sight, in a hideout especially built to go unnoticed. But since bin Laden never traveled and nobody could get onto the compound without passing through two security gates, there was no way to be sure.

Despite that uncertainty, intelligence officials realized this could represent the best chance ever to get to bin Laden. They decided not to share the information with anyone, including staunch counterterrorism allies such as Britain, Canada and Australia.

By mid-February, the officials were convinced a “high-value target” was hiding in the compound. President Barack Obama wanted to take action.

“They were confident and their confidence was growing: ‘This is different. This intelligence case is different. What we see in this compound is different than anything we’ve ever seen before,'” John Brennan, the president’s top counterterrorism adviser, said Monday. “I was confident that we had the basis to take action.”

Options were limited. The compound was in a residential neighborhood in a sovereign country. If Obama ordered an airstrike and bin Laden was not in the compound, it would be a huge diplomatic problem. Even if Obama was right, obliterating the compound might make it nearly impossible to confirm bin Laden’s death.

Said Brennan: “The president had to evaluate the strength of that information, and then made what I believe was one of the most gutsiest calls of any president in recent memory.”

Obama tapped two dozen members of the Navy’s elite SEAL Team Six to carry out a raid with surgical accuracy.

Officially, it was a kill-or-capture mission, since the U.S. doesn’t kill unarmed people trying to surrender. But it was clear from the beginning that whoever was behind those walls had no intention of surrendering, two U.S. officials said.

The helicopters lowered into the compound, dropping the SEALs behind the walls. No shots were fired, but shortly after the team hit the ground, one of the helicopters came crashing down and rolled onto its side for reasons the government has yet to explain. None of the SEALs was injured, however, and the mission continued uninterrupted.

With the CIA and White House monitoring the situation in real time – presumably by live satellite feed or video carried by the SEALs – the team stormed the compound.

Thanks to sophisticated satellite monitoring, U.S. forces knew they’d likely find bin Laden’s family on the second and third floors of one of the buildings on the property, officials said. The SEALs secured the rest of the property first, then proceeded to the room where bin Laden was hiding. In the ensuing firefight, Brennan said, bin Laden used a woman as a human shield.

The SEALs killed bin Laden with a bullet to the head. Using the call sign for his visual identification, one of the soldiers communicated that “Geronimo” had been killed in action, according to a U.S. official.

Bin Laden’s body was immediately identifiable, but the U.S. also conducted DNA testing that identified him with near 100 percent certainty, senior administration officials said. Photo analysis by the CIA, confirmation on site by a woman believed to be bin Laden’s wife, and matching physical features such as bin Laden’s height all helped confirm the identification. At the White House, there was no doubt.

“I think the accomplishment that very brave personnel from the United States government were able to realize yesterday is a defining moment in the war against al-Qaida, the war on terrorism, by decapitating the head of the snake known as al-Qaida,” Brennan said.

U.S. forces searched the compound and flew away with documents, hard drives and DVDs that could provide valuable intelligence about al-Qaida, a U.S. official said. The entire operation took about 40 minutes, officials said.

Bin Laden’s body was flown to the USS Carl Vinson in the North Arabian sea, a senior defense official said. There, aboard a U.S. warship, officials conducted a traditional Islamic burial ritual. Bin Laden’s body was washed and placed in a white sheet. He was placed in a weighted bag that, after religious remarks by a military officer, was slipped into the sea about 2 a.m. EDT Monday.

Said the president: “I think we can all agree this is a good day for America.”

Ironically the very things Obama spoke against, the interrogations and phone tapping was a key piece to assisting Obama and the Navy Seals tracking and finding Osama in his hideout this week.

DOMA: Honor and the Limits of Politics

The desire to achieve victory in any field of endeavor can become so intense that it deforms the character of...