After receiving $20 billion in U.S. aid over the past decade, Pakistan is unmistakably America’s worst “ally,” having committed the ultimate betrayal: Hiding Osama Bin Laden. Now, Pakistan is angrily protesting the raid that killed him, refusing to give access to 11 of those arrested in his compound and is supporting terrorists likely to try to avenge his death. Pakistan is not an ally worth defending as President Obama did in his address to the country; it is an enemy worth punishing. 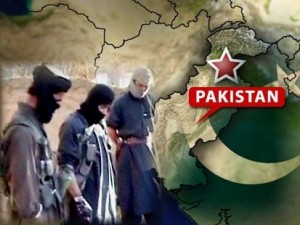 was obviously designed to hide someone of enormous importance. It is now known that Bin Laden’s next-door neighbor, living only 80 yards away, was Major Amir Aziz, a senior army officer. The country’s premier military academy is about a mile away, which General Petraeus visited in February of last year. Many retired intelligence and military personnel live in the affluent city and it is only an hour away from Islamabad.

The Pakistani government is reacting to the exposure of its guilt by bashing the raid, with its officials describing it as “cold-blooded.” The upper house of its parliament is accusing the U.S. of violating the country’s sovereignty and the government is threatening “disastrous consequences” if there are any more unilateral raids. The army has announced that it will reduce the number of U.S. troops in the country to “minimum essential” levels and the Army Chief of Staff said there will be a “review on the level of military/intelligence cooperation with the United States” if another raid is carried out. Pakistan may also forbid future drone strikes, as it was pushing for an end to them shortly before Bin Laden was killed.

President Obama’s announcement that Bin Laden had been killed was designed to protect relations with Pakistan from the inevitable outrage.

“It’s important to note that our counterterrorism cooperation with Pakistan helped lead us to Bin Laden and the compound where he was hiding. Indeed, Bin Laden had declared war against Pakistan as well, and ordered attacks against the Pakistani people…it is essential that Pakistan continues to join us in the fight against Al-Qaeda and its affiliates,” Obama told the nation.

Senator John Kerry does not downplay Pakistan’s treachery but cautions against jeopardizing the relationship. Senator Richard Lugar has not shied away from pointing his finger at the Pakistani government but likewise said, “Distancing ourselves from Pakistan would be unwise and extremely dangerous.”

It is true that Pakistan’s limited cooperation has been critical to the prosecution of the War on Terror. More than two-thirds of the killings and arrests of Al-Qaeda members have occurred on Pakistani soil. However, there is a clear pattern of the highest terrorists living in comfortable areas under the control of the Pakistani government, including Khalid Sheikh Mohammed, Abu Zubaydah and Ramzi Binalshibh, called the “20th hijacker.” As Richard Miniter writes, “Bin Laden’s mansion-hideout in Pakistan was not the exception, but the rule.”

A Month in the Life of Islam in Europe

by Soeren Kern- The controversial Egyptian Islamic scholar Yusuf al-Qaradawi is moving to Norway to help Muslims in the polar...