Newly released videos show Osama bin Laden watching himself on television and rehearsing for terrorist videos, revealing that even from the walled confines of his Pakistani hideout, he remained a media maestro who was eager to craft his own image for the cameras. 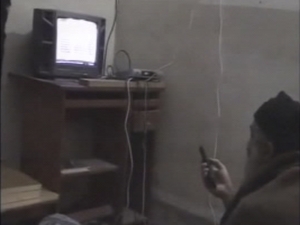 The videos, released by U.S. intelligence officials Saturday, were offered as further proof that Navy SEALs killed the world’s most wanted terrorist this week. But they also served to show bin Laden as vain, someone obsessed with his portrayal by the world’s media.

One of the movies shows bin Laden, his unkempt beard streaked in gray, sitting on the floor, wrapped in a brown blanket and holding a remote control. He flipped back and forth between what appears to be live news coverage of himself. The old, small television was perched on top of a desk with a large tangle of electrical wires running to a nearby control box.

In another, he has apparently dyed and neatly trimmed his beard for the filming of a propaganda video. The video, which the U.S. released without sound, was titled “Message to the American People” and was believed to be filed sometime last fall, a senior intelligence official said during a briefing for reporters, on condition that his name not be used.

The videos were seized from bin Laden’s compound in Abbottabad, Pakistan. Officials said the clips shown to reporters were just part of the largest collection of senior terrorist materials ever collected. The evidence seized during the raid also includes phone numbers and documents that officials hope will help break the back of the organization behind the Sept. 11, 2001 terrorist attacks.

Intelligence officials have known that bin Laden and al-Qaida monitored the news. But for years, when it was assumed that he was living in Pakistan’s rugged, mountainous tribal region, some believed he might not be able to get real-time news. 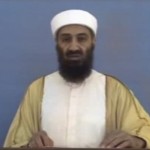 After the CIA discovered bin Laden’s suburban compound, they realized that a satellite dish provided a television feed to bin Laden’s compound. The video also reveals that bin Laden had a computer in his home, though officials say there were no Internet or phone lines running from the house.

Bin Laden and four others were killed in a daring pre-dawn raid Monday after U.S. helicopters lowered a team of SEALs behind the compound’s high walls. The terrorist leader’s death leaves al-Qaida with an uncertain future and represents America’s most successful counterterrorism mission.