Two recessions, a couple of market crashes, and stubbornly high unemployment are all wreaking havoc on America’s middle class.

In the accompanying interview, The Daily Ticker’s Aaron Task discusses the state of the middle class with Sherle Schwenninger, director of economic growth and American strategy programs at the New America Foundation. Schwenninger’s recent report “The American Middle Class Under Stress” has some stunning facts that highlight the struggles the average American is having getting a decent-paying job and keeping up with rising cost of living.
Here are just some of the sobering facts: 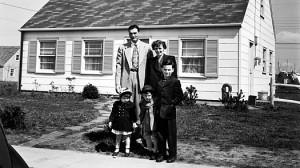 — There are 8.5 million people receiving unemployment insurance and over 40 million receiving food stamps.

— At the current pace of job creation, the economy won’t return to full employment until 2018.

— Middle-income jobs have been replaced by low-income jobs, which now make up 41% of total employment.

— 17 million Americans with college degrees are doing jobs that require less than the skill levels associated with a bachelor’s degree.

— Over the past year, nominal wages grew only 1.7% while all consumer prices, including food and energy, increased by 2.7%.

The bottom line is simple says Schwenninger: The middle class is shrinking, which threatens the social composition and stability of the world’s biggest economy. “I worry that we’re becoming a barbell society – a lot of money wealth and power at the top, increasing hollowness at the center, which I think provides the stability and the heart and soul of the society… and then too many people in fear of falling down.”

The “America” that so many of us have taken for granted for so many decades is literally disintegrating right in front of our eyes. Most Americans are still operating under the delusion that the United States will always be “the wealthiest nation” in the world and that our economy will always produce large numbers of high paying jobs and that the U.S. will always have a very large middle class. But that is not what is happening. The very foundations of the U.S. economy have rotted away and we now find ourselves on the verge of an economic collapse. Already, millions upon millions of Americans are slipping out of the middle class and into the devastating grip of poverty. Statistic after statistic proves that the middle class in the United States is shrinking month after month after month. Meanwhile, millions of Americans are starting to wake up and are beginning to realize that we have very serious problems on our hands, but they have no idea what is causing our economic distress and they are unaware that most of our politicians have absolutely no idea how to fix the economic disaster that we have created.

On the mainstream news, the American people are treated to endless footage of leaders from both political parties proclaiming that the primary reason that we are in the midst of such an economic mess is because of what the other political party has done.

Republicans proclaim that we are experiencing all of this economic chaos because of the Democrats.

Democrats proclaim that we are experiencing all of this economic chaos because of the Republicans.

Even many readers of this column (who are generally more educated and more informed than most average Americans) leave comment after comment blaming either the Democrats of the Republicans for our current economic mess.

But do you really want to know who is to blame for our economic problems?

This economic nightmare has taken literally decades to develop, and both Democrats and Republicans have contributed greatly to this disaster.

Both parties have absolutely refused to stand up to the Federal Reserve and the horrific economic policies that they have been shoving down our throats for decades.

Both parties have shoved the spending accelerator to the floor when they have been in power and now we have the largest national debt in the history of the world.

Both parties have done essentially nothing as the health care industry, which was once the envy of the world, has degenerated into a cesspool of corruption and greed and now seems designed to do little more than to provide pharmaceutical companies and health insurance crooks with obscene profits.

It does not take a genius to figure that out.

Can anyone out there explain how that is a formula for economic prosperity?

Can anyone explain how that would work?

Please leave a comment and explain that to all of us if you can.

The truth is that as wealth continues to leave the United States and as the U.S. gets even deeper into debt, more Americans are going to become poor.

It really is that simple.

The following are 15 shocking poverty statistics that are skyrocketing as the American middle class continues to be slowly wiped out….

#1 Approximately 45 million Americans were living in poverty in 2009.

#2 According to the Associated Press, experts believe that 2009 saw the largest single year increase in the U.S. poverty rate since the U.S. government began calculating poverty figures back in 1959.

#3 The U.S. poverty rate is now the third worst among the developed nations tracked by the Organization for Economic Cooperation and Development.

#4 According to the U.S. Department of Agriculture, on a year-over-year basis, household participation in the food stamp program has increased 20.28%.

#5 The number of Americans on food stamps surpassed 41 million for the first time ever in June.

#6 As of June, the number of Americans on food stamps had set a new all-time record for 19 consecutive months.

#7 One out of every six Americans is now being served by at least one government anti-poverty program.

#8 More than 50 million Americans are now on Medicaid, the U.S. government health care program designed principally to help the poor.

#9 One out of every seven mortgages in the United States was either delinquent or in foreclosure during the first quarter of 2010.

#10 Nearly 10 million Americans now receive unemployment insurance, which is almost four times as many as were receiving it in 2007.

#11 The number of Americans receiving long-term unemployment benefits has risen over 60 percent in just the past year.

#12 According to one recent survey, 28% of all U.S. households have at least one member that is looking for a full-time job.

#15 One out of every five children in the United States is now living in poverty.

As millions more Americans continue to climb on to the “safety net”, how long is it going to be before it breaks?

The cost of every U.S. government anti-poverty program is absolutely soaring. Meanwhile, the U.S. government is already running a budget deficit that is approaching 1.5 trillion dollars every year. If you cannot understand that we have a very serious problem on our hands then you are probably not awake.

The U.S. economic system is dying. Blaming the other political party is not a solution. Running around the country offering “hope” and “change” and giving people a vague sense that things will get “better” soon is not going to cut it either.

But nearly all of our politicians are way too busy either trying to get elected or trying to stay in office to tackle the very serious problems which are destroying our economy.

None of that is doing any good. Right now millions of Americans are getting sucked into poverty each year and neither major political party is doing anything real to address the very real economic problems that are causing that to happen.

But most Americans have become so “dumbed down” that they don’t even understand what the real problems are anymore.

All most Americans seem to want these days is to watch a good show.

So send in the clowns.

There are certainly enough of them in Washington D.C. to keep Americans entertained for quite a long time.

In Case You Missed It:  Dirtbag Chris Wray Says the FBI Is the Real Victim — After Six Years of Spying on Trump and Then Unprecedented Raid on His Home at Mar-a-Lago
Posted in Financial and tagged Depression, Dover, Economy, Federal Reserve, Financial, Foreclosures, Governments, Obamanomics, Unemployment, United Socialist States of America, US Citizen.

Muslims Throughout the World Riot and Mourn Osama bin-Laden (Video)

In the news video below you can watch Muslims pack the streets and public squares of cities all over the...