By DAILY MAIL REPORTER–Third scare in two days for air passengers in America.

Security alerts at train stations and airports across U.S. after death of Bin Laden 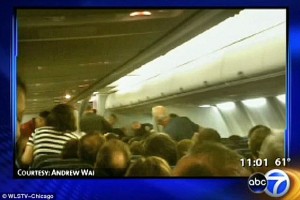 Crew members and passengers wrestled a 28-year-old Middle Eastern man to the cabin floor after he began pounding on the cockpit of a plane trying to break in while it was on final approach to San Francisco.

The man was yelling unintelligibly as he ran past a flight attendant to the cockpit door about 10 minutes before American Airlines Flight 1561 from Chicago was due in on Sunday night, police said. A woman in a row across who speaks Arabic translated that Almurisi said Allah Akbar or “God is Great!” in Arabic.

Andrew Wai, another passenger, told KGO-TV on Monday that the wife of one of the men who took Almurisi down later said Almurisi was yelling “Allahu Akbar.”

“There was no question in everybody’s mind that he was going to do something,” he said

The motive was unknown it is unknown if the suspect has any ties with Islamic terrorism, he said.

The attempt on this jetliners is one of the three scares for U.S. air passengers this weekend and follows a number of security alerts at train stations and airports across America following the death of Osama Bin Laden:

A Middle Eastern man slipped into the PATH tunnel at the World Trade Center in New York and walked all the way to Jersey before saying he had left a bomb in the tunnel.

Police blocked off several streets in the Bronx, New York, as the NYPD bomb squad investigated a parked SUV. The Mockingbird DART station and the surrounding area in Dallas, Texas, were evacuated on Saturday after a police dog alerted authorities to suspicious packages.

Four people were arrested at Denver International Airport after staff noticed someone videotaping security lines. A picture of a little baby being patted down by security staff at Kansas City Airport was posted on Twitter.

It was a male flight attendant who tackled the Muslim suspect on the American Airlines flight, and other crew members aided as the suspect attempted to break through the cockpit door.

‘He asked for help; a couple of passengers joined in,’ said the spokesman. ‘They were able to get him to ground and a flight attendant put him in plastic handcuffs.’

The Boeing 737 carrying 162 people landed safely at 9:10pm and Almurisi was taken into police custody. He was charged with interfering with a flight crew – a federal offence.

During the scuffle, Almurisi sustained some bruises and was checked at a hospital before being transported to San Mateo County Jail, the officer said.

It was the third terrifying incident for air passengers over the weekend.

It comes after officials stepped up security across America last week as they warned there was ‘enhanced potential’ for violence against the U.S. following Osama Bin Laden’s death.

Elsewhere, a 60-year-old army veteran has been hailed a hero after tackling a man who went berserk aboard a passenger jet and tried to open the door at 35,000ft.

Vietnam vet Tony Harris leapt into action after a flight attendant noticed the ‘burly’ man run to the main door in the front of the Boeing 737, saying he had to get off the plane.

Mr Harris, a martial arts expert, tackled the man from behind and hauled him to the ground as he grabbed the door handle.

Terrified travellers watched as the pair struggled on the floor of the aircraft before Harris, with help from two other passengers, managed to handcuff the unruly man.

The Continental Airlines flight from Houston to Chicago was diverted to St. Louis where officials took the 34-year-old man, from Burbank, Illinois, into custody. He is being questioned by police and the FBI.

Mr Harris told ABC news that he decided to act after he saw the man lunge into a flight attendant.

He said: ‘He just pushed her right over, so he assaulted her. Well at that time I’m already in motion.’What I did was I just jumped on him,I wrapped my legs around him, I put my 210 pounds of weight on his neck and he still wouldn’t go down.’

Eventually Mr Harris managed to subdue the passenger using a choke-hold. He then sat next to him until the plane landed in St. Louis.

After he had got the situation under control the other passengers gave him a round of applause and offered to buy him a drink.

Mr Harris added: ‘I asked him, ‘What in the hell were you doing? What were you thinking?’ He said, ‘Well, it’s Mother’s Day’.

The incident happened at around 1pm on Sunday. The plane was on the ground at St. Louis for just over an hour before being cleared for take-off to continue on to Chicago.

Earlier on the same day a Delta Air Lines flight from Detroit to San Diego was diverted to Albuquerque, New Mexico, after a flight attendant found a note in the lavatory with the word ‘bomb’ on it.

FBI agents rushed to the scene at Albuquerque International Sunport airport at about 10am local time before ushering the 137 passengers and six cabin crew members away and to safety.

The pilot had decided to divert the Delta 1706 flight just before 10am after an attendant found a suspicious note on the plane.

Passenger Tim Cole, 55, of a Hazleton, Pennsylvania, said the pilot told passengers a note with the word ‘bomb’ on it was found in one of the bathrooms.

‘The captain came on and said “You notice we’re declining. We’re getting ready to divert. It’s probably a hoax, but we’ve got to take this very seriously”,’ Cole said from Albuquerque airport.

The passengers were then held at a warehouse at the airport while FBI agents and dogs searched everyone’s carry-on luggage, he said.

It Takes a Village to Lobby: The Hypocrisy of Planned Parenthood

Large majorities of the public favor parental notice before an abortion can be performed on a minor girl, and the...