(OC Register)– High pay and benefits for lifeguards in Newport Beach is the latest example of frustrating levels of compensation for public employees. More than half the city’s full-time lifeguards are paid a salary of over $100,000 and all but one of them collect more than $100,000 in total compensation including benefits. We are talking about real lifeguards, not the Baywatch actors and actresses playing in a weekly TV series. 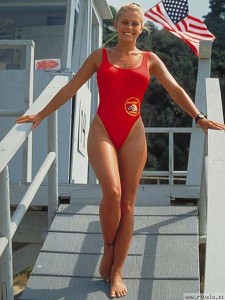 When thinking about career options with high salaries, lifeguarding is probably not one of the first jobs to come to mind. But it apparently should. In one of Orange County’s most desirable beach destinations, Newport Beach, lifeguards are compensated all too well; especially compared with the county annual median household income of $71,735.
It might be time for a career change.

According to a city report on lifeguard pay for the calendar year 2010, of the 14 full-time lifeguards, 13 collected more than $120,000 in total compensation; one lifeguard collected $98,160.65. More than half the lifeguards collected more than $150,000 for 2010 with the two highest-paid collecting $211,451 and $203,481 in total compensation respectively. Even excluding benefits like health care and pension, more than half the lifeguards receive a total salary, including overtime pay, exceeding $100,000. And they also receive an annual allowance of $400 for “Sun Protection.” Many work four days a week, 10 hours a day.

Lifeguarding in Newport Beach is a pretty good gig, if you can get it.
There is no denying that lifeguards protect swimmers and play a vital safety role in protecting numerous beachgoers every year. In 2010, the total number of rescues by Newport Beach lifeguards was 2,190. Even so, these salaries seem too generous, and the compensation levels don’t appear fiscally sane.

In a phone conversation, Brent Jacobsen, president of the Lifeguard Management Association, defended the lifeguard pay in Newport Beach: “We have negotiated very fair and very reasonable salaries in conjunction with comparable positions and other cities up and down the coast.” “Lifeguard salaries here are well within the norm of other city employees.” And therein is the problem: Local public worker pay has become all too generous and out of line with private sector equivalents.
On face, the compensation packages for these guards are staggering. But take into consideration the retirement benefits being paid to currently retired lifeguards and lifeguards who will retire at these pay levels in the future and the problem is further compounded. Lifeguards are able to retire with 90 percent of their salary, after only 30 years of work at as early as the age of 50.

A YouTube video created by Americans for Prosperity-California, an education advocacy organization concerned with limited government, lower taxation, and free-market principles, outlined how in Newport Beach a “recently retired lifeguard, age 51, receives a government retirement of over $108,000 per year for the rest of his life.” The video also notes that “He will make well over $3 million in retirement if he lives to age 80!”

The Newport Beach City Council – as well as other beach cities – ought to take a hard look at reforming the pay scale and compensation for lifeguards as well as the way in which the department is organized. This is a reasonable starting point for applying some fiscal sanity to public employee compensation.

Wave of Protests Continues Across North Africa and the Middle East