CAIRO — A day after dozens were seriously injured in the latest spate of clashes between Muslims and Coptic Christians here, thousands of Christians on Sunday denied the request of the community’s leader to lift a sit-in demonstration on response to Muslims fire bombing a Church last week. 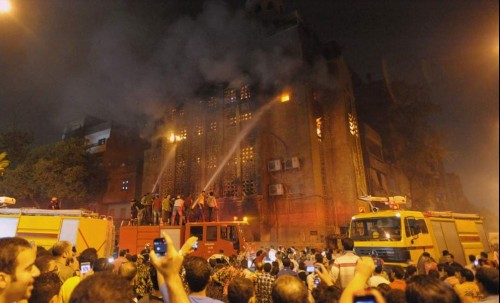 Witnesses said the clashes began late Saturday after Muslim snipers opened fire from locations across the Nile River on Christians who have been camped outside the main state television building for nearly a week to demand better protection from the government after last week Islamic attacks on Christians.

The gunfire and subsequent clashes in a normally-safe downtown Cairo sector underscored the volatility and intensity of long-subdued rifts in Egyptian society that were unleashed by an uprising that ousted the ruling party here in February.

Saturday’s clashes came a week after a Muslim mob set fire to a Coptic Christian church in a low-income Cairo neighborhood, setting off hours-long clashes that left at least 12 dead and emotions raw.

“We are not leaving until we get our rights, even if only one of us survives by the end of this,” said Maher Talaat, 28, a Christian demonstrator standing outside the state television building Sunday. “

Tensions between Muslims and Coptic Christians, who make up roughly 10 percent of the country’s population, date back decades. But the turmoil was kept largely under wraps by the police state that ceased to be when President Hosni Mubarak was forced to step down.

Mityas Nasr, a prominent Coptic priest who has been at the sit-in for several days, said the violence began when a group of Muslims became angry when Christian guards attempted to search them for weapons near the gathering area. He said at least 80 demonstrators were severely wounded.

The leader of Egypt’s Coptic Orthodox Church, Pope Shenouda III, issued a statement Sunday urging demonstrators to go home, saying the unrest had “exceeded the mere expression of opinion,” and was “harming Egypt’s reputation and your reputation.” Thousands ignored the plea.

“Coptic youth are angry because the government has been slow to heed their request for their rights,” Nasr said. He lamented that Egypt now has “stand-by Islamic thugs, mercenaries who wait for signals to attack.”

The nominal source of the recent violence was the case of a Coptic woman who reportedly converted to Islam to be with a man she loved. Coptic leaders who were attempting to prevent her from leaving the church came under attack by Muslims. Such cases of alleged forced conversion have become controversial in Egypt in recent years because the Coptic Church and Muslim leaders frown upon mixed marriages.

Christian leaders called for the sit-in outside the television building, which is across the river from the upscale Zamalek district, to urge the country’s interim military rulers to do more to keep them safe. The Egyptian Initiative for Personal Rights, a well-regarded non-governmental organization, issued a report saying security forces could have done more to stop clashes last weekend in the Imbaba district.

“What we are witnessing here are the tensions of transition and uncertainty,” said the group’s executive director, Hossam Bahgat.

Bahgat said tactics employed by Egypt’s military rulers in recent months to quell unrest have been counterproductive. “The recent wave of violence should send a clear signal to the military rulers that a law banning protests and the resort to military trials for civilians are not effective means to maintain law and order,” he said.

Copts blame Salafis, Muslims who practice a dogmatic version of islam, for the recent violence and for forcibly converting Coptic women into Islam by force.

“Many of our girls have been kidnapped,” Talaat, the demonstrator said. “This is just our stand against the army and the Radical Islamic Salafi population.”

In Case You Missed It:  9-11-2001 NEVER FORGET
Posted in Terrorism and tagged Egypt, Islam, Muslims.

Yesterday, members of the House Armed Service Committee, under the leadership of Representative Michael Turner (R–OH) increased the funding for...