TEHRAN (AFP) – Iranian President Mahmoud Ahmadinejad said he has temporarily assumed the duties of the oil ministry, as the oil cartel OPEC prepares for a biannual meeting in Vienna. 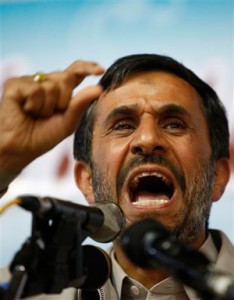 “For now, I myself am the caretaker of the oil ministry,” Ahmadinejad said in a televised speech late Sunday, without elaborating.

On Saturday, Ahmadinejad dismissed oil minister Masoud Mirkazemi, alongside two other ministers, whose portfolios are expected to be merged with other departments as part of a cabinet streamlining.

Then on Sunday, he appointed caretakers for the industry and social affairs ministries, but did not name anyone for the oil ministry which is to be integrated with the energy portfolio.

His decision to take charge of Iran’s most-strategic sector came shortly before the 159th OPEC meeting scheduled for June 8 in Vienna, where the oil producers are represented by their ministers.

Mohammad Ali Khatibi, Iran’s representative to OPEC, told AFP on Monday that the president would be eligible to chair the meeting.
“As he is the caretaker of the ministry, he may attend the (ministerial) meeting,” he said in a telephone interview.
“But it is not customary… the president usually takes part in summits,” Khatibi said, adding he was “expecting” the president to appoint a representative for the upcoming meeting.

Iran, the second largest exporter of crude in the Organisation of Petroleum Exporting Countries, currently holds the presidency of the cartel, a position it is holding for the first time since the 1979 Islamic revolution.

The oil minister’s dismissal also comes amid Ahmadinejad’s efforts to change the structure his government, which has become the subject of a political showdown with the parliament.

The conservative-dominated Majlis has argued it should be in charge of the streamlining operation, with some lawmakers criticising the disappearance of the oil industry.

Huckabee Won’t Run for President in 2012

Former Gov. Mike Huckabee of Arkansas announced on his Fox News radio show Saturday night he will not seek the...