For all the problems we think we have with immigration, Europe’s problems far exceed ours.  The U.S. has always had a history of panic about new and alien groups pouring into our country (Irish, Italians, Jews, Chinese, Japanese, Vietnamese, and now Hispanics).  But all of these groups came here to become American; they integrated and contributed. By and large, the same is true of Muslim immigrants to the U.S. today-particularly Iranians and Afghans. In Europe, however, many in the flood of Muslim immigrants are not integrating well-partly out of today’s spate of Islamism but partly because ordinary Europeans find these immigrants adhere to an alien culture. 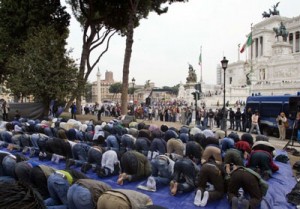 Muslim immigrants in Rome illegally take over the Piazza Venezia in Rome, Italy.

Europeans, after the horrors and genocides of World War II, made a commitment to open their doors to needy immigrants. England is awash with Pakistanis; France with North Africans; Germany with Turks from religious villages; and the Scandinavian countries have been the most generous of all, taking in Somalis, Iraqis, Moroccans, and others. All are creating trouble on two fronts:  social integration and horrific welfare costs.  The educated elites, who run Europe, have ideological notions that do not jibe with the realities faced by ordinary working Europeans who have not found these immigrants a benefit to their lives.

On the social front (little publicized) are the soaring crime rates:  rapes, domestic violence, honor killings, incest, forced child marriages, and public belligerence against European culture. On the economic front, it is even worse. There is enormous welfare fraud, financial support for polygamous families with bloated birthrates, and an overwhelming of these countries’ healthcare systems.

In Europe, Canada, and Australia, there is growth of Immigrants scamming social services. One clever rascal in Canada (arrested in 2011) provided false Canadian citizenship documents to hundreds of people in the Middle East so they could collect benefits and tax refunds of up to $500,000. Even worse, none of the recipients actually lived in Canada. The Mounties caught him.

An Iranian immigrant was told by his Swedish social worker that there was no need to get a job because the Swedish government put checks in the mail each month.  (Someone should find her and fire her.)  Indeed Sweden does this, to the tune of about $7 billion every year, which has contributed to bringing the Swedish welfare state to the brink of bankruptcy. The same is true for Norway. Non-Westernimmigrants, they say, are ten times as likely to be on social assistance as native Norwegians.

Muslim immigrants in Denmark make up 5% of the population but consume 40% of welfare spending. In France, a polygamous Muslim father of 17 children was charged with welfare fraud when authorities discovered that two of his “wives” lived in Dubai for a year while continuing to get welfare benefits worth 10,000 Euros. One of his wives had been fined for driving while wearing a niqab that restricted her vision.

Australia, which is less tolerant of criminal immigrants than Europe, discovered that an Algerian immigrant and father of seven, Abdul Nacer Benbriks, on trial for terrorism, had been ordered deported three times, never worked a day in 19 years, and has cost the Australians millions in welfare payments, baby bonus checks, and other benefits.

Canada’s most notorious terrorist family, the Khadrs, still live on welfare in the Toronto suburbs, and they all share the beliefs of their relative, confessed terrorist Omar Khadr, still in Guantanamo Bay, having pleaded guilty to killing a U.S. soldier in Afghanistan in 2002.

Many well-known Islamic radicals are also on the dole. In London, Anjem Choudary, a notorious hate preacher, has bragged about receiving 25,000 pounds a year in benefits. He also threatened an attack during the recent royal wedding.

Finally, someone is trying to do something about it. British Prime Minister David Cameron has said that large-scale immigration had caused “discomfort and disjointedness” in some parts of the country. He wants the government to reduce net immigration from hundreds of thousands to tens of thousands a year. That is a start, but does not begin to address the social and financial cost of their indulgent generosity and careless follow-up.

Obama Throws Israel to the Dogs

Robert Spencer- America is on the verge of abandoning its most reliable ally in the Middle East, thanks to Barack...