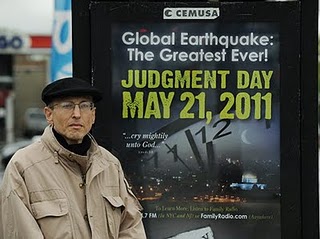 Robert Patrick worked 20 years for the Transit system and retired with a pretty nice saving. He is convinced Camping is right and has spent his full $100,000 in saving on Subway and Bus ads ( He is standing next to one of the Ads)

He is 60 years old and has used all his savings. The cost of advertising in the subways is expensive and he will have nothing left as of DOOMS DAY (May21st)

Camping followers are spending their last penny because there will be no need for cars,money,food are anything after May 21st

Camping followers have left Christianity for Camping teachings. I have spoken to a few Harold Camping members and many have contacted this site. I am sorry to say but just like their God “Harold Camping” many of them need professional psychiatric treatment

I am not joking, these are some very scary people. Please understand folks that there is no New Zealand Earthquake starting on May 21 that will roll through the whole world. This is NOT the BIble it is a confused old man’s numbers.

Retirement of $110,000 dollars gone while Camping keeps his Millions

His followers may not realize this but he OWNS THE $70 MIILION DOLLAR RADIO STATION!! Of course he takes no salary!

How much money do you think the Lost sheep followers of Harold Camping are going to get back from him on May 22? NOT A PENNY

There will be many lawsuits on the 22nd but his followers will lose. They have been deceived by a possibly insane or demonic possessed 90 year old man pumping his fake Bible on the air 24 hours a day.

What would make people lose all intelligence and wear a sign, print hats or paint the date May 21 2011 END OF THE WORLD on their cars? 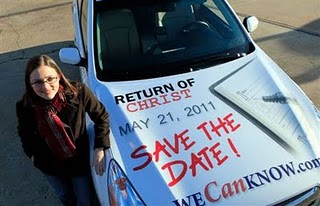 Harold Camping would not dress like this or stand on a corner but leaders do not have to, blind followers are willing to give all to a leader’s teaching

Camping has been causes family separations and will ruin finances.

We have a possibly mentally ill 90 year old man who says 200 million people will float into the sky next Saturday. He just happens to own a Radio and Tv Station and is pumping out his own Bible version. What would cause people to give him their last penny.

Be very careful confronting Camping followers as many of them appear to be very unstable.

There is nothing of God in Harold Camping, please avoid him

The Administration Must Not Bend to Russian Missile Defense Demands