In his address to congress, Netanyahu said that militant Islam threatens Islam. As if there were any such thing as a non-militant form of Islam. An ideology that was militantly expansionistic from birth. And yet that expansionism does threaten it.

It’s not mere militancy that threatens Islam, but its own lack of proportion. Had the Nazis satisfied themselves with a round of domestic purges and only a little territorial expansionism, today they might still be running a bankrupt decaying state. 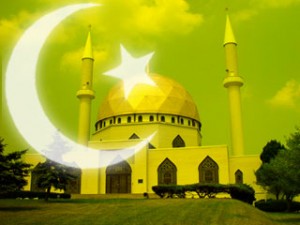 News stories from the 1970s and 1980s might carry reports of popular protests against the disastrous economics of National Socialism. But Hitler and his cronies lacked a sense of proportion. When they capped off an invasion of Russia, war in Africa and an air campaign against England, with a declaration of war on America—they were done. And their ideology went down with them.

If an ideology fighting a simultaneous war on nearly every continent sounds familiar, it should. The new Islamic crusade is just as arrogantly overextended. Just as certain that it can win every battle because it’s destined to. That its inherent superiority makes it unbeatable. And that its enemies are cowards who are easily tricked and even more easily beaten.

Had Muslims focused on domestic revolutions, most of the world would have let it go. Western countries have lost their enthusiasm for armed interventions on behalf of tyrants. And if foreign businessmen can learn to live with Dubai and Saudi Arabia, they would have accepted similar transformations in Egypt and Syria. Muslims could have assembled a Caliphate with hardly an objection from abroad. But instead they spent more time focused on conquest, than on revolution.

Like an amateur gambler flush with his winnings, the Imams and Mullahs swelled with pride and decided they couldn’t lose. They wouldn’t just bring down their own countries, instead they would tie everything together and pull it all down. Use terrorism to blackmail and intimidate the West. And then use that as a lever for regime change. It’s working quite well so far. But then again most battle plans work, when the enemy is hardly fighting back.

The Islamists are assembling too many enemies too fast
The Islamists are assembling too many enemies too fast, to consider what would happen if those enemies united against them. They have spent too much time gloating over the Western dependency on their oil and their immigrants to think about what will happen the day the oil pipeline and the immigration pipeline are cut off. Like the Nazis, they are spending too much time moving pins on a map to note all the places where they are advancing, all the wars they are fighting and all the mosques they are building, to take the time to realize how vulnerable that makes them.

Hitler thought himself quite clever for taking the Rhineland, seizing Austria and carving up the industrial riches of Czechoslovakia with the consent of his old enemies. Then with bombers flying over London and tanks deep in Russia, the Third Reich and its allies seemed unstoppable. But then a few years later, enemy troops were closing in on Berlin. That’s the problem with believing you’ll win because you’re destined to. By the time you realize how badly you screwed up, it’s too late.

By the end of 1941, Hitler was actually taking the initiative against America, which last time around had decisively turned the tide. There’s hardly a more clear cut case of completely forgetting the lessons of a war that you had actually fought in. But the Nazi drive to power had been built on denying the real political, military and economic lessons of WW1. The assertion that Germany lost because it was betrayed, doomed it to lose a second time.

The Islamists suffer from the same problem. Their denial of history dooms them to repeat it all over again. Their assertion that Islamic states are immune from the social and economic problems of secular states means that their aspirations for a Caliphate will fall apart into bickering and civil war. And their belief that Islamic warriors are any better than ordinary tribals armed with machine guns and RPG’s has been disproven on countless battlefields. The myth of the suicide bomber is the last resort of a delusional ideology trying to deny its own human vulnerabilities.

The obsessive petrodollar construction projects of Dubai have something of Albert Speer about them. Huge tasteless buildings constructed to show the grandeur of a regime, even while revealing its lack of taste and creativity. And its underlying insecurity. The Nazi, Communists and now Muslims obsession with constructing gargantuan inhuman structures reveal some of the insecurity behind the violence. Giant concrete and steel security blankets by vicious men terrified of their own mortality.

Insecurities lead to grandiosity. The tilting shots of Leni Riefenstahl depicting the Aryan man as more than human, or the Muslim martyr who willingly kills himself for the Jihad, share a common contempt for humanity. And beneath that contempt a craven fear of being merely human.

The ambition of the Caliphate conceals its own rot. The graffiti portraits of martyrs on walls turn them into museums of fear. The grandiosity of a worldwide Jihad is not the work of strongminded men, but of weak ones. The Jihad is not on the march because it is strong, but because it is unable to offer any real solutions to domestic problems. All that Islamic groups do is offer subsidized services and bribes in exchange for popular support. The same cheap trick that every Muslim and even non-Muslim government does.

The inherent social instability of Islam necessitates its expansionism. Just as the economic instability of National Socialism made Kristalnacht and the invasion of Poland necessary for the Nazi elite. Or the economic failures of Soviet Communism made its own expansionism inevitable. A strong warlike country’s ideology doesn’t fail internally, until it also fails externally.

The Islamic Jihad is a social instability disguised as brute force expansionism. Weakness trying to pretend it’s strength. Events in Iran have shown that Islamic regimes are no more stable than secular ones. Eventually the greed of the ruling oligarchy and the fanaticism of its clerics runs into the barrier of public frustration and rage. Exporting the same instability and fanatical violence to Western countries through immigration may topple the free world. But it’s more likely to lead a backlash. And that is exactly what’s starting to take place now.

Western socialists need immigrants, but even they have their limits. And that limit will be reached when they realize that Islamic immigration and violence makes their dream of a new Europe and a world united under international law null and void. Even without that, their welfare state utopias have a limited lifespan. And when those utopias collapse, they won’t have much use for immigrants. Or for the violence they bring with them.

Islam is overreaching badly
Islam is overreaching badly. Its political successes have inflamed its sense of destiny. But politics turns. And unlike a high tech society or a competent military—the political advantage and wealth that comes from an addiction to oil are both vulnerable to sudden change. The wheel of history is turning. And while Muslims are confident that it is turning in their direction, they would do well to remember that the glorious days of mastery they are trying to recapture came to an end for a reason. That the ruler of history raps hardest the knuckles of those who refuse to learn its lessons. And that they have now become its worst pupils.

Horror for US Economy as Data Falls off Cliff

The last month has been a horror show for the U.S. economy, with economic data falling off a cliff, according...