Twenty Somali Muslims have been charged in Minnesota with supporting a terrorist organization.

STAR TRIBUNE–An Ohio man who once lived in Eden Prairie was arrested Thursday morning in Columbus, becoming the 20th person of Somali descent charged in Minnesota for allegedly supporting the terror group Al-Shabab. 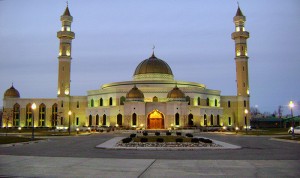 Massive Mosque inside the United States

Ahmed Hussein Mahamud, 26, made his initial appearance Thursday morning in federal court for the Southern District of Ohio. He is on his way to Minnesota to face charges that he provided money and personnel to Al-Shabab, a group defined as a terrorist organization by the U.S. State Department.

Al-Shabab is fighting a civil war for control of Somalia. A Minnesota man was killed last week while attempting a suicide bombing on behalf of Al-Shabab. His family believes the man is Farah Mohamed Beledi.

Beledi was one of 19 people who have been indicted in Minnesota for allegedly providing material support to a terrorist organization. Mahamud, who was indicted last week but whose indictment was sealed until his arrest Thursday, becomes the 20th.

The indictments come from a three-year investigation into the recruiting, training and funding of Somalis from the U.S. to return to their homeland to fight. An estimated 20 young men from Minnesota are believed to have returned to Somalia since 2008, sparking what has been considered one of the largest counterterrorism investigations in the U.S. since the attacks of Sept. 11, 2001.

Federal officials say eight of the 20 charged have been arrested in the U.S. or overseas. Five of them have pleaded guilty in connection to the case. Three others are awaiting trial here, including Omer Abdi Mohamed and two women from Rochester accused of raising money for Al-Shabab. Omer Mohamed is scheduled to go on trial July 13. He is also accused of raising money to help send others to Somalia to fight.

Six men from Minnesota are believed to have been killed while fighting in Somalia. The investigation in Minnesota began in late 2008 — when Minneapolis resident Shirwa Ahmed became the first-known American citizen suicide bomber in Somalia. Since then, Somali-born residents of Europe, Canada and elsewhere in the United States have also allegedly lent their support to Al-Shabab as fighters or funders. (Source)

(Associated Press) A Chinese ratings house has accused the United States of defaulting on its massive debt, state media said...