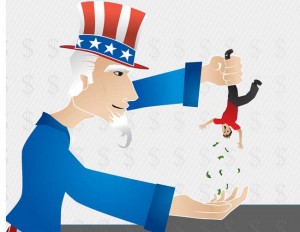 The government added $5.3 trillion in new financial obligations in 2010, largely for retirement programs such as Medicare and Social Security. That brings to a record $61.6 trillion the total of financial promises not paid for.

This gap between spending commitments and revenue last year equals more than one-third of the nation’s gross domestic product.

Medicare alone took on $1.8 trillion in new liabilities, more than the record deficit prompting heated debate between Congress and the White House over lifting the debt ceiling.

Corporations would be required to count these new liabilities when they are taken on — and report a big loss to shareholders. Unlike businesses, however, Congress postpones recording spending commitments until it writes a check.

The $61.6 trillion in unfunded obligations amounts to $527,000 per household. That’s more than five times what Americans have borrowed for everything else — mortgages, car loans and other debt. It reflects the challenge as the number of retirees soars over the next 20 years and seniors try to collect on those spending promises.

“The (federal) debt only tells us what the government owes to the public. It doesn’t take into account what’s owed to seniors, veterans and retired employees,” says accountant Sheila Weinberg, founder of the Institute for Truth in Accounting, a Chicago-based group that advocates better financial reporting. “Without accurate accounting, we can’t make good decisions.”

Michael Lind, policy director at the liberal New America Foundation’s economic growth program, claims there is no near-term crisis for federal retirement programs and that economic growth could make these programs more affordable.

“The false claim that Social Security and Medicare are about to bankrupt the United States has been repeated for decades by conservatives and libertarians who pretend that their ideological opposition to these successful and cost-effective programs is based on worries about the deficit,” he says.

USA TODAY has calculated federal finances based on standard accounting rules since 2004 using data from the Medicare and Social Security annual reports and the little-known audited financial report of the federal government.

The government has promised pension and health benefits worth more than $700,000 per retired civil servant. The pension fund’s key asset: federal IOUs.

(USA News) Two new EPA pollution regulations will slam the coal industry so hard that hundreds of thousands of jobs...