(Washington Times) The Obama administration has mindlessly flooded the country with hundreds and hundreds of billions of federal tax dollars. The government gurus claim the reason for opening the federal-money floodgates was to jump-start the sluggish economy, which was strangled to begin with by Fedzilla’s housing policies – or lack thereof. 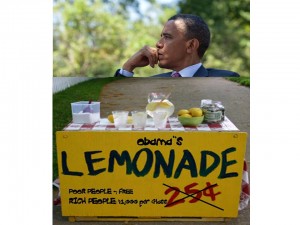 Just as you would not pour gas on a fire in hopes of putting it out, infusing more than a trillion taxpayer dollars into the economy has not and will not work to put the economy on the path to prosperity. An artificial economy cannot be repaired with more artificiality. Who doesn’t know this?(Answer: Liberals and their drones)

President Obama’s economic and social engineering has been a flop, a disaster. The economy continues to sputter, gag and hemorrhage; unemployment and underemployment are getting worse, not better; housing prices continue to plummet; the dollar’s value is shrinking; and our debt is suffocating any hopes of a long-term economic recovery. Keep the Titanic on course, captain.

Dumping more than a trillion dollars into the market and claiming to want to stimulate the nation’s economy is analogous to intentionally allowing the Missouri River to flood towns and cities because the streets need cleaning.

Either the Obama administration does not know its history or it intentionally wants to kill off the nation’s private sector. It might be a little of both.

The Obama regime may be the least qualified when it comes to understanding how a free market operates, how jobs are created and how profits are made. I have yet to uncover any high-ranking Obama appointee with any free-market experience, including the secretary for the Department of Labor, which should be renamed under the Obama regime as the Department of Labor Unions.

The bottom line is that we have entrusted our economy to a group of people who would not know how to operate a child’s lemonade stand. What an inexcusable, tragic mistake.

We faced a similar economic problem back in the early 1980s. After soundly defeating President Carter, Ronald Reagan, a fan of the free market, took the opposite approach of what Mr. Obama is doing to turn the economy around.

What happened because of President Reagan’s approach of lowering taxes, reducing federal regulations and favoring the private sector over Fedzilla? Almost 40 million private-sector jobs were created and America experienced a 25-year economic boom.

What America needs is a vibrant, growing and strong economy that benefits everyone, especially the shrinking middle class. This will not happen with a guy in charge who believes Fedzilla knows best. It does not.

There has been no net increase in jobs created as a result of swamping the economy with federal dollars, and there will be none. When the free-market history books are written, this will be the central theme of surrendering the economy to central planners in Washington who have zero private-sector experience.

The Obama regime has given America a crystal-clear message that liberalism in big government is an economic wrecking ball. What America desperately needs is a much leaner, less bureaucratic federal government – the very kind of federal government our framers had in mind when they started this experiment in self-government more than 230 years ago.

Got the message, GOP? Can you deliver it?(probably not but they can’t possibly do the harm Obama has caused this country)

In Case You Missed It:  UPDATE: Saudi Prince Offers Glimpse of Dazzling $500 Billion ‘Smart City of the Future’ Where You Will Own Nothing and Be Happy
Posted in Tyranny and tagged Economy, Liberalism, Obama, Obamanomics.

A video shows an IDF officer offering water to Arab protesters on a sweltering day. An Arab woman dumped the...