Here’s an interesting report from Pakistan’s daily newspaper The Nation. 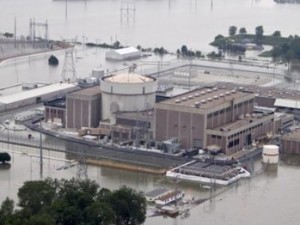 It cites a Russian regulatory agency as saying that the US is currently having a major nuclear emergency at the flooded plant in Nebraska and that the Obama Administration is trying to cover it up.

The Russian report describes the Nebraska situation as one of the worst nuclear accidents in the history of the United States.

Bear in mind that this report comes from Russia and Pakistan–two countries that aren’t particularly happy with Obama right now.

But the FAA has enacted a no-fly zone over the Fort Calhoun nuke plant, which was damaged by a fire and flooding from the Missouri river.

Here’s the report from The Nation:

According to this report, the Fort Calhoun Nuclear Plant suffered a “catastrophic loss of cooling” to one of its idle spent fuel rod pools on 7 June after this plant was deluged with water caused by the historic flooding of the Missouri River which resulted in a fire causing the Federal Aviation Agency (FAA) to issue a “no-fly ban” over the area.

Located about 20 minutes outside downtown Omaha, the largest city in Nebraska, the Fort Calhoun Nuclear Plant is owned by Omaha Public Power District (OPPD) who on their website denies their plant is at a “Level 4” emergency by stating: “This terminology is not accurate, and is not how emergencies at nuclear power plants are classified.”

Russian atomic scientists in this FAAE report, however, say that this OPPD statement is an “outright falsehood” as all nuclear plants in the world operate under the guidelines of the International Nuclear and Radiological Event Scale (INES) which clearly states the “events” occurring at the Fort Calhoun Nuclear Power Plant do, indeed, put it in the “Level 4” emergency category of an “accident with local consequences” thus making this one of the worst nuclear accidents in US history.

Though this report confirms independent readings in the United States of “negligible release of nuclear gasses” related to this accident it warns that by the Obama regimes censoring of this event for “political purposes” it risks a “serious blowback” from the American public should they gain knowledge of this being hidden from them.

In Case You Missed It:  Far-Left MSNBC Host: Republicans Are Going to “Cheat” in the Midterms – “They Know Their Policies Are Trash” (VIDEO)
Posted in Tyranny and tagged Censorship, Obama, United Nations.

Millions of Americans probably received this week’s email from President Obama, inviting them to send money and be registered to win...