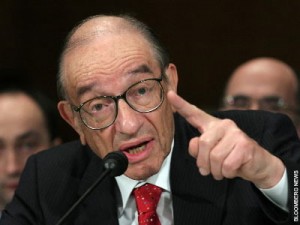 In a blunt critique of his successor, Fed Chairman Ben Bernanke, Greenspan said the $2 trillion in quantative easing over the past two years had done little to loosen credit and boost the economy.

“There is no evidence that huge inflow of money into the system basically worked,” Greenspan said in a live interview.

“It obviously had some effect on the exchange rate and the exchange rate was a critical issue in export expansion,” he said. “Aside from that, I am ill-aware of anything that really worked. Not only QE2 but QE1.”

Greenspan’s comments came as the Fed ended the second installment of its bond-buying program, known as QE2, after spending $600 billion. There were no hints of any more monetary easing—or QE3—to come.

Greenspan said he “would be surprised if there was a QE3”  because it would “continue erosion of the dollar.”

The former Fed chairman himself has been widely criticized for the low-interest rate policy in the early and mid 2000s that many believe led to the 2008 credit crisis.

Bernanke, who took over for Greenspan in 2006, began implementing the quantitative easing program in 2009 in an attempt to unfreeze credit and prevent a collapse of the US financial system. The strategy has gotten mixed reviews so far.

On Greece, Greenspan a default is likely and will  “affect the whole structure of profitability in the U.S.” because of this country’s large economic commitments to Europe, which holds Greek debt. Europe is also where “half the foreign [U.S.] affiliate earnings” are generated, he added.

Greenspan was also pessimistic about the U.S. deficit talks, saying he didn’t think Congress would reach an agreement on raising the debt ceiling by the Aug 2 deadline.

“We’re going to get up to Aug 2 and I think on that night, we are not going to have the issue solved,” he said.

If that happens, he said, the U.S. would have to continue paying debt holders or risk major damage in global financial markets. As a result, “we will default on everything else.”

He added: “At that point, I think we’ll all come to our senses.”

The Religion of Rape… All Norwegian Rapists in 2010 Were Muslim

Every single rapist in Norway in 2010 was Muslim. A fluke? The report was cited by an official Norwegian television...