Every single rapist in Norway in 2010 was Muslim.

The report was cited by an official Norwegian television station, which interviewed a victim who said that her rapist explained to her that his religion permits him to rape her. 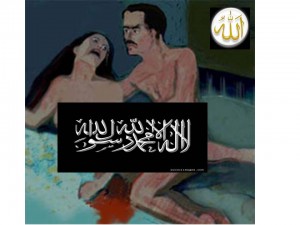 According to the police report there was a total of 186 of known rape cases in 2010. These fall into various categories, the largest one of which is assault-rape, carried out by sheer physical force, of which there were 86 cases. In 83 of these cases the perpetrator could be identified by the victim. In all 83, the attacker was described as having “non-western appearance,” a laundered euphemism for Muslim immigrants from Africa, the Middle East, or Asia.

In other categories of rape there were Norwegian attackers as well, but they were still in the minority (Note: the translation of the Norwegian TV report embedded here does not make a distiction between “assault rape” and other forms of rape, and appears to confuse the statistics for 2010 with those for 2006-2010).

A female police officer who commented on the report explained that “Many of the perpetrators who commit these rapes are on the edge of society often unemployed, arriving from traumatized countries. In the past five years it has often been asylum seekers.”

The problem is not new. A report in Aftenposten in 2001 said: “While 65 percent of those charged with rape are classed as coming from a non-western background, this segment makes up only 14.3 percent of Oslo’s population. Norwegian women were the victims in 80 percent of the cases.”

“In other words,” says the New American, “Muslims from Africa and other benighted Third World places are targeting Western women for rape.” It elaborates:

“In 2005, the blogger Fjordman reported on a similar rape wave in Sweden. A crime prevention study that year reported that Algerians, Libyans, Moroccans, and Tunisians ‘dominate the group of rape suspects,’ he reported. The same year, the newspaper Aftonbladet reported that nearly half of all rapists were immigrants.”

Yehuda Bello, an Israeli blogger who is well-acquainted with Norwegian culture, noted the report and claimed that Norwegians are a culture that suffers from “extreme boredom” due to the presence of huge oil reserves, and are thus inordinately interested in multiculturalism and assorted “human rights” campaigns.

They are also traditionally anti-Semitic, he believes. As a result their politicians and press are focused on Israel’s actions in Shechem (Nablus) and Hevron and choose to ignore Muslim misdeeds – be they in Iran, Syria, or in Norway itself.

Despite this, he reports, the Muslim rape campaign has become so terrible that even Norwegians have begun to recognize the reality around them, and in recent months there have been protests where the slogan was “Muslims out!”.

Arab countries plan to demand more robust safety regulations on nuclear facilities worldwide, with a particular focus on reactors in...