Gaza today is a middle class society being portrayed by the flotilla, and BDS crowd, as one of the greatest humanitarian disasters on earth. The 2011 flotilla is sailing just days after Gaza City opened its second super shopping mall replete with a wide range of goods, mostly supplied by Israel. By the way, most of the building material, including the moving escalators, came from Israel. 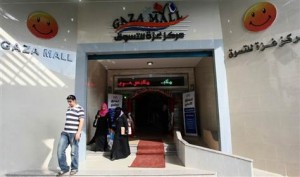 Even assuming that Palestinians can’t survive on an excess of one and a half billion dollars of annual international aid plus a local economy that is growing at a double digit rate per annum, thanks to the cooperation of Israel, why are these flotilla people blowing more than ten million Euros on a publicity circus? Danny Williams in the February 2, 2011 edition of “Liberal Conspiracy” said that this figure only covered the hire of the ships but did not include the fuel, personal expenses, or the needless aid which, in the case of the American ship, seems to be an essential bundle of love letters to the people of Gaza. Will Gazans survive without this essential humanitarian aid, I wonder, if “The Audacity of Hope” gets diverted to Ashdod?

William’s assessment did not include the more recent addition of a Jordanian ship for which Jordanians miraculously found $805,000 to buy this boat. And you thought they were also struggling to make ends meet?

The twisted logic of anti-Israel radicals can pervert anything. Take the example of the “Juliano” ship of the flotilla. This boat was named after Juliano Mer, an Israel Arab from Haifa who closely identified with the Palestinian cause to the extent that he organized a theatre in Jenin. Mer was gunned down outside his theatre by Palestinian gunmen. Yet, despite the fact that he was murdered by Palestinians the activists can push credence to such an extreme degree as to name a boat after him as part of their Palestinian platform and use it to condemn Israel. They are unable to find the irony in their decision.

The American radicals involved with the “The Audacity of Hope” have fronted their publicity stunt with useful idiots who purport to champion minority civil rights. Alice Walker may be author of The Color Purple, but it is the Code Pink radical movement who intend to arrive in Gaza and embrace the Hamas leaders of Gaza and hand them their love letters with speeches of support. Do these people not know that this Islamic terror regime came to power in a brutal and bloody coup 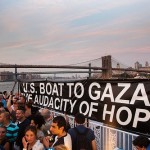 during which they threw opposition members of rooftops to their death? Do they not know that Hamas is imposing a radical Shariah law in Gaza that marginalizes women, permits honor killings, executes and tortures gays, and put their children into military style summer camps where they are taught how to kill Jews? When they return to the calm of mid America will they then realize the insanity of what they have done? I doubt it.

In their political ignorance and blindness they do not realize that, in their meddling, they are delegitimizing the Palestinian Authority.One of the chief organizers of the flotilla, Joe Catron, announced in the Palestine News Network that the flotilla is indeed a political provocation. When has it pretended to be anything else?” They think they are attacking the legitimacy of Israel. Israel will simply impound the boats, deport the radical activists and misguided passengers, and get on with life. The real and profound damage of this expensive charade will be to undermine the so-called moderate arm of Palestinian society, namely the Fatah-led Palestinian Authority. By openly embracing Hamas, an act that would be magnified by the close attention of the media horde, they strengthen the Palestinian extremists who wish to ratchet up the violence, and they weaken a Palestinian political element on whom any hope for peace and reconciliation depends upon. The sheer act of heading for Hamas, and ignoring the cooperative venture between Israel and the Palestinian Authority, highlights what really lies at the malevolent heart of the Gaza flotilla. It is a deliberate provocation to a success story of mutual interest. They know it. This is what Catron meant by his words.

Israel and the official Palestinian Authority ship massive amounts of aid, money, goods, and services to Gaza through official, efficient, and supervised channels. Surely this is what they should have been promoting? The truth is the flotilla organizers are not interested in a peaceful solution. That is the evil insanity of this flawed mission.

IMMORAL
There are Jewish floaters on the flotilla boats. What is that all about? How can these people embrace Hamas Gaza? Have they not read Article 7 of the Hamas Charter? How can they hug and kiss people whose motivation is enshrined in these words;

“The time will come when the Muslims will fight the Jews and kill them until the Jews will hide behind rocks and trees who will cry out ‘Oh Muslim! There is a Jew behind me. Come and kill him!’”

Notice this Hamas Charter does not talk of Israeli, or Zionists. They talk of Jews. To be honest, I did not know where to categorize the American Jews who are sailing to support the racist, Anti-Semitic, Hamas. Are they insane? Are they immoral? I think they are both. They are worse than useful idiots. They are traitors to their people and to their faith. Shame on them!

Much more can be said about the insanity of the Gaza flotilla. It certainly is not a humanitarian mission. The International Red Cross and the United Nations have said so.Insanity and immorality merge when describing the excessive activism that goes into promoting the fraud of the Palestinian condition. The World Bank statistics show that 15 million children die of hunger every year. None die of hunger in Gaza. They also state that well over 500 million people live in absolute poverty in Asian, Africa, and Latin American countries. Why are these flotilla people heading to a prospering society? By the way, the International Herald Tribune on June 27, 2011, reported that an additional two luxury hotels are opening up in Gaza in July. They also record something we have known for some time, that thousands of new cars are flooding the wide new streets of Gaza, and two dozen new schools are in the advanced planning stage.

Wouldn’t the efforts of the flotilla, if they were genuine humanitarians, be better appreciated in more desperate parts of the world? It would, but then they wouldn’t be able to beat on Israel, would they?

So we are back to the main aim of the flotilla which is a political provocation organized by people who support Hamas or other terrorists. Catron, who I referred to earlier, is a leading member of the International Solidarity Movement. This is an organization of hardened radicals who aid and abet terrorists as they did when they protected the two British suicide bombers who were on their way to blow up Israelis in Mikes Place on the Tel Aviv beachfront on April 30, 2003. Three were killed and more than 50 injured by their “charitable” act.

The immorality is pretending to offer substantial help to Gazans while their real intent is to discredit Israel with a bunch of lies.

These pretend humanitarians, who claim to be coming to champion the abused human rights of people in Gaza, have studiously ignored the human rights of one lonely guy in Gaza. Gilad Shalit was kidnapped by Hamas terrorists who infiltrated into Israel over five years ago and dragged this Israeli back into Gaza where they are holding him in defiance of human rights, and in defiance of the Geneva Convention. In June, they refused the demand of the International Red Cross to have access to Shalit, or to receive evidence of sign of life. Shalit has been held in isolation for five years. Hamas has consistently refused access to him. They have refused to give details of his condition or even if he is still alive. They have tainted his family with mock demonstrations of a desolate and aging Shalit being terrorized by Hamas. One of the main flotilla activists, Dror Feiler, asked the head of the Free Gilad Shalit campaign to give him a letter to produce if and when the flotilla mob get to Gaza. The Shalit guy correctly conditioned the release of a letter to Gilad to the Gaza flotilla people personally delivering it to Gilad and not simply use it as a publicity stunt. Not surprisingly, they did not respond to this condition.

That is the immorality and fraud of their mission. It has zero to do with human rights. It does nothing to protect Israel. It does nothing to advance a peace process. It interferes with cooperative ventures between Israel and the Palestinians via the official and recognized channel. It has more to do with hate of Israel than love for Palestinians. It is an extravagant waste of money that appalls those involved with genuine humanitarian missions.

Now we come to the criminal actions of this fraudulent campaign. The Israeli blockade of Hamas-controlled Gaza is legal. International law says so. No matter how much these radicals may protest, this is an inevitable truth. So their provocative actions, in attempting to break this blockade, gives support to an internationally recognized terrorist organization that targets innocent Israeli civilians in rocket and mortar attacks, suicide missions, and kidnapping of Israelis for ransom. Israel is within its rights to defend its citizens. It provides full logistical support for the transfer of aid, goods, and services to the people of Gaza. The Israeli blockade is legal. The action of the flotilla in defying international law is, therefore, illegal. And they know it.

Allow me to add another element of the illegality of the flotilla, namely the media that are accompanying the radicals. Let me explain this point with an anecdote.

A local reporter hears that his friend is planning a major bank robbery. He asks his friend to join him on the heist in the interests of getting the scoop on this breaking event. He joins the gang on their ride to the bank, enters the bank with the robbers and witnesses the job in action. He is on the spot when the police arrive in force. After a scuffle they overcome the bank robbers but also arrest him.

“Wait!” he demands. “You can’t arrest me. I’m a reporter. I have immunity under freedom of the press!”

The media decided to embed themselves with the flotilla crowd knowing they were setting out to defy the law. Faced with punishment when they are towed into an Israeli port with the rest of the passengers they are claiming “freedom of the press” as their excuse for immunity from criminal charges being lodged against them. Many would argue for a free press, but when journalists side with people defying the law, especially when they are terrorist supporting radicals, they have crossed that red line between honor and cynical dishonesty, even illegality.

Just in : Organizers of the flotilla seeking to break Israel’s blockade over the Gaza Strip on Sunday rejected an offer by Athens to allow Greek Navy ships to transfer the humanitarian aid they had planned to bring with them to Gaza on their behalf.

America’s birthday is also that of Calvin Coolidge, the only president born on the Fourth of July. Though best remembered...