The White House said Wednesday there was no danger of an imminent attack on airplanes after reports that Islamic terror groups were mulling implanting bombs into the bodies of Muslim terrorist passengers in an attempt to blow up jetliners in mid flight. 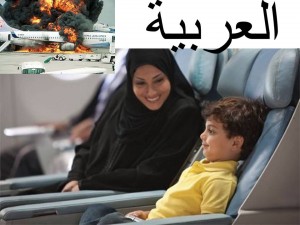 Passengers flying to the United States could now face even tougher screening measures, a spokesman for the Transportation Security Administration, Nicholas Kimball, told the Los Angeles Times. Expect your 6 year old daughter to be a target of intense interrogation.

“These measures are designed to be unpredictable and will not target people of Middle eastern appearance, so passengers should not expect to see the same activity at every international airport,” Kimball said, adding existing methods could not detect plastic explosives under the skin.

“Measures may include interaction with passengers, in addition to the use of other screening methods such as pat-downs and the use of enhanced tools and technologies.”

White House spokesman Jay Carney confirmed that officials from Homeland Security and the TSA had been in contact with airlines to warn of the Muslim plots to kill passengers.

“The action they took in briefing air carriers and foreign partners to provide greater insights into recent intelligence indicating continued interest of Muslim terrorists to target aviation did not relate to an imminent or specific threat,” he said.

“Islamic terrorist groups have repeatedly and publicly indicated interest in pursuing ways to further conceal explosives and we continue to evolve just as the threat does,” he added.

“In other words, this is the idea that Muslims have been looking for other ways to circumvent security measures in order to target aircraft. It’s not at all surprising.”

But security at US airports has been ramped up over the past decade since Al-Qaeda militants hijacked four US planes on September 11, 2001 and plowed two of them into the World Trade Center in New York.

A third plane hit the Pentagon in Washington, and the fourth crashed into a Pennsylvania field after the passengers overcame the Muslim hijackers.

There have been several attempts by Islamic groups to blow up US-bound airlines, including on Christmas Day 2009 when a Muslim Nigerian man was arrested for carrying plastics explosives stitched into his underwear which he planned to ignite on a flight from Amsterdam to Detroit and kill as many non-Muslims as he could.

The trial of Islamic radical Umar Farouk Abdulmutallab on terror charges is set to begin in October.

“If the girls give me trouble I hurt them.” These are the words of human trafficker Aktham Zuhair Salem Madanat....