But they really, really want peace. So go on… give ‘em a State:
Gaza’s Islamic terrorists have a new tool helping them to fire on innocent civilians living in southern Israel – the popular satellite mapping program Google Earth. A group of terrorists from the Al-Aksa Martyrs’ Brigades recently described their use of the program to a reporter for Slate Magazine. 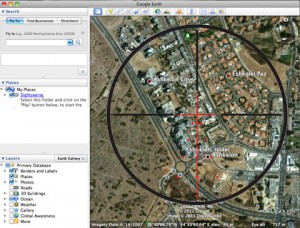 “The technology is always improving,” a terrorist calling himself Abu Saif told journalist Sharon Weinberger. “Our struggle started with the Kalashnikov, and then it moved to the suicide bomb, then the locally made rocket, and now the Grad rocket.”

Gaza terrorists in rocket launching crews use Google Earth to aim their weapons, Abu Said said. The program is seen as superior to maps because it is more up-to-date and gives precise locations for potential targets.

Gaza terrorists who spoke to Weinberger said they plan to continue with rocket attacks despite the deployment of the Iron Dome system, which shoots short-range rockets out of the air. “The Israelis are using a lot of money for this defense, but during the last rocket attacks, our rockets made it through,” explained Abu Hamza, a senior Islamic Jihad terrorist.

Abu Saif suggested that Gaza terrorists were getting their hands on new technologies that would help them continue attacks. “At some point in the future, the Grad will be a thing of the past,” said Abu Saif.

Terrorists are believed to have used a laser-guided missile in a recent attack on a school bus that murdered Israeli teenager Daniel Viflic.

Another way in which terrorists are using modern technology is public relations. They have begun making their own videos to send to the media in hopes of gaining support. One recent video filmed by Abu Saif’s group was sent to Al Jazeera.

“In some way, rocket making has almost become an extreme form of reality television,” Weinberger suggested, “with the militants understanding that playing to the cameras is as important as, or perhaps more important than, actually launching rockets.”

The al-Aqsa Brigades are effectively the military wing of Fatah, the dominant political force in Judea and Samaria (the so-called ‘West Bank’) and the Palestinian Authority; although they also carry out operations from Gaza.

Unfortunately, the previously unimaginable benefits the internet has brought to humanity will inevitably have a dark side.

But there should be no suggestion that just because Gaza terrorists (or terrorists from anywhere else for that matter) can make use of a public facility, that it should be withdrawn, restricted or degraded.

On the contrary – the more opportunities there are for the educational attainment, technology, freedoms and public-spiritedness characteristic of democratic Western societies (Israel included) to be contrasted against the negative, hate-driven, nihilistic perma-violence of Islamic terrorism; the better.

That apart, this story should also serve as a timely reminder that these are the actions of people who think they deserve a state – and not least one that would be required to ensure that Israel would be able to enjoy secure borders.

The April 20, 2010 oil spill in the Gulf of Mexico devastated the Gulf economy, which, more than a year...