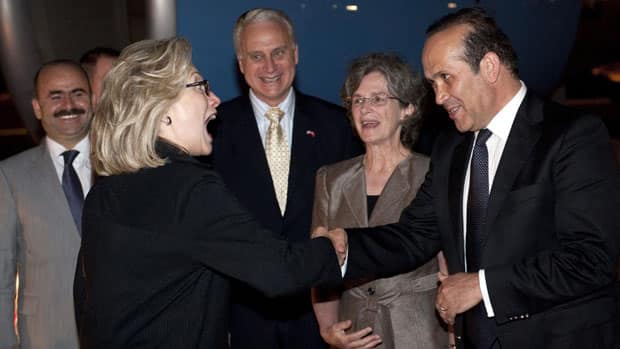 U.S. Secretary of State Hillary Clinton greets the Turkish ambassador to the U.S., Namik Tan, right, alongside U.S. ambassador to Turkey Francis Ricciardone, centre, and his wife, Marie Ricciardone, after disembarking from her airplane in Istanbul on Friday. Clinton joins leaders from nearly 40 countries for meetings to discuss Libya. (Saul Loeb, Pool/Associated Press)

Turkey’s roadmap is one of several potential paths the international community and the Transitional National Council (TNC) have had to choose from. However, as NATO members are anxious to wrap up the military campaign, a plan for transition may soon be achieved.

Today, the International Contact Group on Libya prepares to meet in Istanbul to discuss a sustainable democratic transition for Libya. One of the main issues on the table will be Turkey’s roadmap, which was proposed last April. While the Turkish Foreign Ministry would not provide details of the conditions of the plan, Ankara’s last draft called for:

The TNC rejected this proposal outright, dissatisfied with an immediate cease-fire as it would not require Muammar Qadhafi to first step down from power.

For the past few months, proposals and drafts outlining a democratic transition have floated around the international community, yet none has been selected to be the facilitator in regime change. Furthermore, various international actors have presented their own ideas for how the Libyan war should end.

Last month, the International Criminal Court filed an arrest warrant for Qadhafi and members of his regime on charges of war crimes. Qadhafi’s longtime friends in the African Union, led by South Africa’s former president Jacob Zuma, failed in persuading the strongman to step down.

The original roadmap Turkey outlined was imperfect, but it was a start. Turkish Foreign Ministry Spokesman Selcuk Unal described the details of the plan as “evolving.” However, as the regime suffers dwindling fuel supplies, low morale among troops, and a cash crisis owing to the halting of Libyan oil exports and the impact of U.N. sanctions, a plan for democratic transition acceptable to all parties will need to be developed sooner rather than later.

Charities Become Collateral Damage in the Debate Over Marriage

Children served by private adoption and foster care organizations are finding themselves among the victims of collateral damage of state...