After working hard to compile a list of Obama’s rather questionable record of fiscal promises and actual executions, the gist of which is represented best by the violent clash between myth and realty in Christina Romer’s “The Job Impact of the American Recovery and Reinvestment Plan” whose epic failure is defined by one simple chart, we were disappointed to learn that Paul Ryan had already done this.

Leaving Paul Ryan’s politics aside, the facts do speak themselves. They speak even louder when one considers the din raised by the same president who back in 2006 said: “The fact that we are here today to debate raising America’s debt limit is a sign of leadership failure. It is a sign that the U.S. Government can’t pay its own bills. It is a sign that we now depend on ongoing financial assistance from foreign countries to finance our Government’s reckless fiscal policies.

Increasing America’s debt weakens us domestically and internationally. Leadership means that ‘the buck stops here. Instead, Washington is shifting the burden of bad choices today onto the backs of our children and grandchildren. America has a debt problem and a failure of leadership. Americans deserve better.” Indeed they do president Obama. Indeed they do. So without further ado… 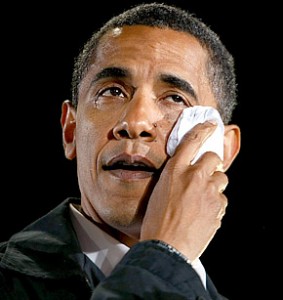 Despite newfound concern with the debt overhang stifling economic growth, President Obama’s record falls far short of his rhetoric. Let’s review the decisions made by President Obama and Congressional Democrats over the past couple of years, and the disappointing results of their policy choices:

President tells the American people in his Inaugural Address: “Those of us who manage the public’s dollars will be held to account, to spend wisely, reform bad habits, and do our business in the light of day, because only then can we restore the vital trust between a people and their government.”

The stimulus adds $821 billion in new spending according to the Congressional Budget Office (CBO).

The White House promises this infusion of spending and borrowing would keep unemployment rate below 8%. As millions of Americans are painfully aware, that promise was broken.

The massive spending bill includes 8,696 earmarks at a cost of $11 billion.

The spending bill adds $19 billion in new spending above the baseline – an 8.6% spending increase.

The Congressional Democrats’ budget calls for a $2 trillion debt increase in 2010, and another 8.9% increase in non-defense discretionary spending.

The reconciliation process is abused to later pave the way for health care overhaul to be jammed into law.

Of note: this is the last time Congressional Democrats will bother budgeting.

The massive new law adds $1.4 trillion in new spending over the next decade, and over $2.5 trillion once the law is fully implemented.

Despite sluggish economic growth and high unemployment, the law imposes over $500 billion in new tax hikes. CBO Director Elmendorf would later testify that the law would reduce employment by roughly half a percent – a reduction of approximately 800,000 jobs.

The 1974 Budget Act requires Congress to pass a budget each year by April 15.

In an unprecedented budget failure, House Democrats not only failed to pass a budget – they opted to not even propose a budget.

The President’s budget yet again calls for the doubling of the debt in five years, and tripling the debt in ten years.

The President’s budget spends $47 trillion over the next decade, imposes over $1 trillion in new tax hikes, and fails to address the drivers of the debt.

The President appears to abandon his own budget by offering a ‘framework’ that calls for additional tax increases, defense spending cuts, and Medicare price controls – yet lacks sufficient detail to back-up claims of deficit reduction.

The House-passed budget cuts $6.2 trillion in government spending over the next decade, saves Medicare, strengthens the social safety net, lifts the crushing burden of debt, and spurs economic growth and job creation.

Senate Democrats fail to meet their legal requirement to pass a budget by April 15.

The rating agency sets off the latest alarm bells, warning of lawmakers of unsustainable fiscal course.

According to the programs’ own trustees, the unsustainable future of Medicare and Social Security threatens the health and retirement security of America’s seniors.

President Obama and Congressional Democrats continue to engage in a partisan campaign to attack efforts to save and strengthen these critical programs – while offering no serious solutions of their own.

While the President’s plan to accelerate our nation toward bankruptcy is unanimously rejected, the stunt on the Senate floor reveals the bankruptcy of Senate Democrats’ ideas.

Senate Democrats have still not proposed any budget.

In testimony before the House Budget Committee, CBO Director Doug Elmendorf responds to questions on the President’s ‘Framework’: “We don’t estimate speeches. We need much more specificity than was provided in that speech for us to do our analysis.”

A devastating jobs report that shows the unemployment rate at 9.2% coincides with the 800th day since Senate Democrats last thought the federal government needed a budget.

On Day 803 since the Senate last passed a budget, Senate Budget Committee Chairman Kent Conrad takes to the Senate floor to deliver a speech about the Senate Democrats’ non-existent budget resolution.

Senator Conrad makes the case for imposing over $2 trillion in new taxes, but provides no actual budget resolution and no credible details.

President Obama tells reporters: “I’ve got reams of paper and printouts and spreadsheets on my desk, and so we know how we can create a package that solves the deficits and debt for a significant period of time. But in order to do that, we got to get started now.”

Aiding and Abetting the Enemy

This past week, the Obama administration informed Congress that it had approved the sale of 125 M1A1 Abrams Tanks to...