As America’s poorest wait for Social Security checks that may never come on Aug. 3, President Barack Obama will be out celebrating a milestone birthday at a party where tickets cost up to $35,800 each. 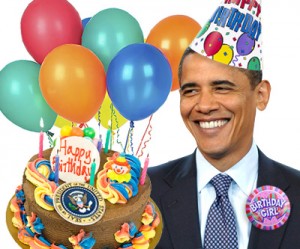 Obama has chosen the first day of the potential default to throw his 50th birthday bash, combining it with raising money for next year’s election. His actual birthday is Aug. 4.

Republicans are slamming the decision to have the party as “insensitive.”

“This really shows how unserious he is,” Republican Rep. Joe Walsh, a fellow Chicagoan, tells Newsmax. “I realize it’s his birthday, but he is a president who has said he doesn’t know if social security checks will go out that day.

“If that’s the case, I cannot believe he will be having a big party that very day.”

Obama said on Tuesday that he cannot guarantee that social security checks will go out from August 3 unless a deal can be reached on raising the nation’s $14.3 trillion debt limit. “There may simply not be the money in the coffers to do it,” he told CBS’ Scott Pelley.

Unless the deal is reached, government services across the board will be cut and in many cases closed down.

“My first thought was that he will have to fly to Chicago before the third because I can’t imagine airports will be open,” said Walsh. “And he’ll have to have a huge supply of candles because the lights are going to go out.

“I am amazed he will be able to have a party at all.”

Walsh said he hopes to be in Chicago on Aug. 3 himself to be with his family in case the calamity that Obama has warned about comes to fruition. “I just doubt I’ll get an invitation to the party,” he said.

Oscar winner Jennifer Hudson is expected to perform at the birthday bash at the historic Aragon Ballroom in Chicago. The event will be one of the president’s biggest fundraisers of the year. Publicity literature featuring a red, white and blue Happy Birthday logo has already been produced.

Another GOP Congressman, Louie Gohmert of Texas was incredulous about the timing. “That’d be as crazy as setting up golf games in the middle of going after Osama bin Laden,” he said. “I’m sure he wouldn’t do something like that – or maybe he would.”

Obama has been leading contentious talks all week with leaders of both parties in the House and Senate to avoid the August 2 deadline. On Friday he warned of financial “Armageddon” if a deal cannot be reached.

Milton Friedman once said that “there is no alternative way, so far discovered, of improving the lot of the ordinary...