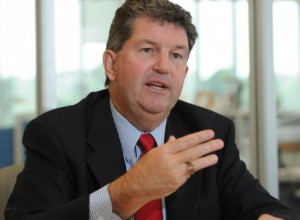 Postmaster General Patrick Donahoe predicts that within 15 years, mail service will be reduced to three days a week.

Donahoe’s forecast is based on a projected $8.3 billion loss this year as the drift from paper to electronic communication hammers the Postal Service. “On Sept. 30,” he told the USA TODAY editorial board Tuesday, “I won’t be able to pay my bills.”

Chief among them: a $5.5 billion payment due Sept. 30 to cover future retirees’ health benefits.
Mail carriers have been making rounds six days a week since the 19th century. After postmasters started talking about cutting back, Congress mandated the six-day delivery in 1983.

Donahoe wasn’t specific about how soon he would like to reduce service but said he thinks Congress, struggling with the federal budget, will be more open to the idea now. He said a USA TODAY/Gallup Poll last year helped move the discussion along. More than half of those polled had no problem with losing Saturday mail.

The Postal Service estimates the move would save $3.1 billion a year.

Donahoe said the idea has “a much better chance today than a year ago. I don’t know if I’d say ‘likely’ yet.”
Asked about the long term, Donahoe said, “At some point, we’ll have to move to three” days a week of mail delivery, possibly in 15 years.

Montana Sen. Jon Tester, a Democrat, won’t vote for it. He says losing Saturday delivery would hurt people in states like his, where simple errands can mean long drives and mail delivery is a lifeline.

“It’s important to have delivery on Saturday in places like Montana to get things like medicine and things they need,” he said.

Some business people aren’t concerned. Richard Cech, founder of Horizon Herbs in Williams, Ore., notes that shipping live plants can be sensitive. “We really like to ship early in the week so people get their things by the end of the week,” he said. “Very little gets delivered on a Saturday.”

Ron Paul: “We Will Default Because The Debt Is Unsustainable”

"When a country is indebted to the degree that we’re indebted, the country always defaults. We will default because the...