Boehner Responds to Obama’s Address: ‘The Bigger the Government, the Smaller the People’

In his response to President Obama’s televised address to the nation Monday night, House Speaker John Boehner stuck to his guns, giving no indication he would be willing to compromise with the President on a debt deal. 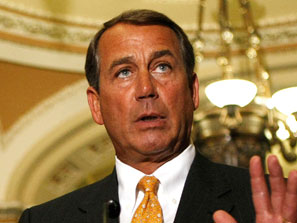 During his address, Boehner asserted that when government grows to the point where it encroaches on people’s lives, people themselves are diminished. Boehner stated, “You know, I’ve always believed, the bigger government, the smaller the people. And right now, we have a government so big and so expensive it’s sapping the drive of our people and keeping our economy from running at full capacity.”

Boehner, who said he ran a small business in Ohio before serving in Congress, was “amazed at how different” Washington DC operated than “every business in America.”

“Where most American business make the hard choices to pay their bills and live within their means, in Washington more spending and more debt is business as usual,” opened Boehner.

“I’ve got news for Washington – those days are over,” he warned.

According to the Speaker, Obama came to Congress in January requesting “business as usual,” which, to Boehner, meant “yet another routine increase in the national debt limit.”

“Here’s what we got for that spending binge: a massive health care bill that most Americans never asked for. A ‘stimulus’ bill that was more effective in producing material for late-night comedians than it was in producing jobs. And a national debt that has gotten so out of hand it has sparked a crisis without precedent in my lifetime or yours,” the Speaker blasted.

Boehner, who believes his caucus has done their best to “convince” Obama to partner with them in an effort to make dramatic changes to the nation’s fiscal trajectory, expressed disappointment in the fact that the President said he would veto the House’s bipartisan ‘Cut, Cap, and Balance’ Act before it was even passed.

“It CUTS and CAPS government spending and paves the way for a Balanced Budget Amendment to the Constitution, which we believe is the best way to stop Washington from spending money it doesn’t have,” Boehner said.

Boehner said he wants the American people to know he “made a sincere effort” to work with Obama in finding a solution that would implement the principles of Cut, Cap, & Balance “in a manner that could secure bipartisan support and be signed into law. ”

“I gave it my all,” the Speaker lamented.

“Unfortunately,” according to Boehner, Obama would “not take yes for an answer.”

But, says Boehner, that is just “not going to happen.”

While Boehner acknowledged that the U.S. government cannot default on its debts, he believes the “crisis-atmosphere,” started by the President, “will simply disappear” if the Senate approves House Republicans’ new plan this week, and Obama signs the bill into effect.

“The debt limit will be raised,” explained Boehner, and ”spending will be cut by more than one trillion dollars.”

The “debate,” according to Boehner, “isn’t about President Obama and House Republicans,“ nor is it about Congress and the White House ”… it’s about what’s standing between the American people and the future we seek for ourselves and our families,” the Speaker explained.

The Speaker, who believes breaking the nation’s debt-grip will “liberate” our economy, said he hopes the President will join Republicans in working to find a way forward.

In Case You Missed It:  This is Why Democrats Are Not Worried about 2020 — The Fix Is In… Postal Service Institutionalizes Ballot Interference Scheme with New Mail-in Ballot Division
Posted in Financial, Tyranny and tagged Debt, Debt Crisis, Economy, Obama, Obamanomics, US Citizen.

It’s hard to understand why President Obama took to the airwaves tonight at prime time. He still has no plan...