The horrific terror attacks in Norway Friday, and that’s what they were just terrible. Whether perpetrated by Al-Qaeda, Hezbollah, or home-grown extremists as it appears to be in this case, led to a lot of initial knee-jerk bigotry.

Blame in on the Christians, leftist and Muslims are using this as a platform to promote anti-Faith bigotry agaist Christians.

In this case, it was not demonizing of Muslims at large, but use of the increasingly popular pejorative in the media of “fundamentalist Christian”, whatever that is?

At first, news organizations identified one of the suspects as a Norwegian citizen who was a fundamentalist Christian and Muslim hater. Despite the fact Anders expressed hatred of the modern institutional church in his manifesto as well as stating he was not a regular church goer.

When it turned out, the man in custody was more of a extreme political right-winger, apparently with no love for Muslim immigrants, who had “posted” his opinions on what were described as fundamentalist Christian websites, which they were not. The Media whom typically won’t release names or religious affiliations upfront, was boldly boasting about this being perpetrated by a blond hair, blue eyed, six foot tall Ethnic Norwegian. It a first I ever seen such a description, they left out his shoe color and shirt brand surprisingly. 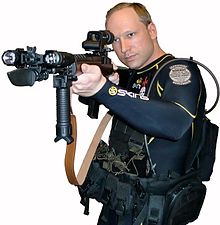 Anders is the new “straw man” to convince the meek that white Christians are very bad dangerous people, this bigotry is being promoted by the lefist and Islamist. It boils down to misrepresenting a group, in this case Christians who the majority continue to hold to a strict interpretation of the Bible, based on the actions of an individual named Jesus whom never advocated harming other people, if anything he proposed the exact opposite, that being total respect to all humans. “forgive them for they do not know”

Having established the fallacy of the lone actor(s) as falsely being representative of that group, you have built up your “straw man.” Next, you knock it down, in this case, implying all fundamentalist Christians are just as criminal as the actor(s). Considering the 9/11 hijackers were Muslim, it’s totally not acceptable to link Islam to 9/11 as we are constantly being told Islam is peace. Although Christians are open game to bigotry and stereotypical it appears, the left quickly linking Anders to the newly found term “Radical Christianity”.

Anyway, that’s how I see it, some may argue that this latest instance shows a predisposition of the “secular media” for malevolently linking a large segment of believers to anti-social, even evil behavior. (I don’t buy that; rather, at worst, it reveals ambivalence by the media toward fundamentalist Christians and religion in general.)

What it does reveal, truly, is the propensity of humanity in general to look for the Scapegoat, and the unpopular group or movement of the moment serves nicely for this form of thinly-veiled bigotry.

Let’s focus on the circumstances in which Anders Behring Breivik planned his crime. Was he a “lone wolf”, like the Oklahoma City bomber or the failed assassin of Chirac? Was his rage, fed by video games, or may also have been caused by the lack of real debate on the radical changes caused by a multiculturalism? Truth is we just don’t know?

Please, do not put all the blame on islamo-criticism gone wrong. This criticism is either absent in the mainstream, or demonized. The thousands and thousands of people murdered by (radical) Islam should weigh heavier than the terrible sick actions of Anders Behring Breivik this week.

We have witness in a very sleazy manner, libels by leftist and Muslims associating Christians to the killers actions. As they refuse to listen to the majority of it citizens and allow massive immigration thus could eventually lead to a clash of civilizations.

As I remain moderate politically, the growing influence of the extreme right wing throughout Europe is a direct response to the massive immigration, unfortunately some wackos like Anders will come out of this. Many expected some kind of response to massive immigration sooner or later, no one expected anything like this, and so dreadful!

Unless Governments open their eyes and begin to understand the fears of the normal man in the street once again, we foresee a repeat of someone taking extreme actions somewhere else in Europe, and not too far in the future.

Boehner: No ‘Blank Check’ for Obama

Boehner Responds to Obama’s Address: ‘The Bigger the Government, the Smaller the People’ In his response to President Obama’s televised...