At least one U.S. military serviceman has been arrested in connection with an alleged plot to attack Fort Hood nearly two years after a deadly shooting rampage at the base,.

Pvt. Naser Jason Abdo whom described himself on an earlier CNN interview  as a devout Muslim,  an AWOL soldier from Fort Campbell, Kentucky, was arrested by the Killeen Police Department near Fort Hood and remains in custody there. Authorities, however, will not say if Abdo is the one who raised security concerns. 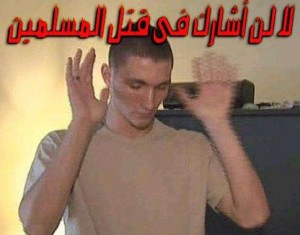 Abdo was found with weapons, explosives and jihadist materials and child pornography at the time of his arrest, a senior Army source confirms to Fox News. He was arrested at around 2 p.m. Wednesday after someone called authorities to report a suspicious individual.

Eric Vasys, a spokesman with the FBI’s San Antonio Office, said authorities found firearms and bomb making components, which he described as smokeless gun powder, inside Abdo’s motel room. Sources also say Abdo was attempting to make a purchase at Guns Galore in Killeen, the same ammunition store where Major Nidal Hasan purchased weapons that were allegedly used to gun down 13 people and wound 30 others on Nov. 5, 2009.

Law enforcement officials suspect Abdo was planning an attack in or around Ft. Hood, though they say the exact target is not clear.

Bob Jenkins, a Fort Campbell spokesman, told Fox News that Abdo was also being investigated for child pornography found on his government computer.

Abdo went AWOL on July 4. On the eve of his first deployment to Afghanistan — after only one year in the Army — Abdo applied for conscientious objector status. It was denied by his superiors at Ft. Campbell but later overturned by the Assistant Deputy Secretary of the Army review board.

It remains unclear if Abdo’s alleged plot to attack in or around Ft. Hood was merely aspirational in nature.

“We are aware at this time that Killeen Police Department arrested a soldier yesterday,” a Fort Hood official said in a statement Thursday. “The incident leading to the arrest did not occur on Fort Hood and the soldier was not a Fort Hood based soldier. At this time, there has been no incident at Fort Hood. We continue our diligence in keeping our force protection at appropriate levels.”

The U.S. Department of Justice also released a statement confirming a “suspect is in custody” and saying, “We are not aware of any further immediate threat to public safety and are actively investigating the matter.”

Vasys said Abdo will likely be charged later Thursday for being in possession of bomb making materials, though a Justice Department official would not confirm whether he faces federal charges.

On Nov. 5, 2009, Major Nidal Hasan, an American Army officer, carried out a shooting attack on the Fort Hood base in Texas that killed 13 people and wounded 30 others.

Hasan, a military psychiatrist, was arraigned on July 20 and is currently standing trial. His civilian lawyer withdrew from the case as it began.

In Case You Missed It:  Woke Pro-Vaccine Army Sergeant Wants You to Know She’s Ready and Willing to Shoot You When Martial Law Is Declared
Posted in Terrorism and tagged Afghanistan, Fort Hood, Islam, Military, Muslims, Terrorism.

China as an Innovation Center? Not So Fast