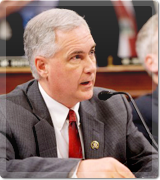 Proportionally, that’s where Washington’s finances are today, and that’s why the national discussion is a little tense, too.

Even these figures belie the magnitude of the fiscal crisis.  Shutting down the entire federal government and firing every federal employee is no longer enough to balance the budget.  Mandatory spending – mainly entitlements – consumes more than the government takes in.

Fortunately, revenues vastly exceed debt payments, so threats of an actual default are so much flimflam.  The President has both the legal authority and Constitutional obligation to prioritize payments to prevent a default.  The problem is that a lot of other bills would go unpaid, causing a downgrade to the nation’s triple-A credit, forcing up interest costs, wiping out all of the savings now on the table and jacking up everything from mortgage interest costs to family credit card rates.

But avoiding a downgrade will take more than just raising the debt limit.  Without a credible plan to place the Treasury back on the path to fiscal solvency – which Standard and Poors defines as reducing the deficit by $4 trillion over the next decade — the nation’s credit will be downgraded no matter what happens with the debt limit.

So what to do?

That’s why the President has actually proposed raising taxes on those earning $200,000 per year ($250,000 for couples).  These are families who are already paying more than half of all income taxes, many of whom are struggling to keep up with upside-down mortgages while putting kids through college without financial aid.  Worse, over 80 percent of small businesses’ net income would be subject to the president’s “millionaires and billionaires” tax at a time when we’re depending on them to produce 2/3 of the new jobs that people desperately need.

The folly of the Left’s tax nostrums is to assume that high taxes are the path to prosperity and an antidote to deficits.  They are neither.

As Adam Smith warned, raising taxes in a recession makes as much sense as a shopkeeper raising prices in a sales slump.  New revenues are needed, but the healthy way is to remove the burdens that government has placed on the economy and produce those revenues through economic growth.  Prosperity is the only true source of revenue.

Nor are taxes an antidote to deficits.  In fact, they’re close cousins: a deficit is simply a future tax.  Both are driven by spending.  It’s no coincidence that while annual spending increased by $1.2 trillion in the last five years, the annual deficit increased by $1.4 trillion.  It’s the spending, stupid.

So how do we reduce spending when promised entitlements are pushing the nation to bankruptcy?  A family grappling with a problem as big as the federal government’s would rapidly come to several conclusions.

First, it’s going to need a work-out plan, starting with a family budget.   In March, the House passed the first Federal budget since 2009.  It would ultimately balance the budget and pay off the debt.  The Senate tore it up.

Second, that family’s going to have to review its spending and pull out everything that it can do without.  The House has begun that process but has a long way to go.  The Senate frets over losing the “Cowboy Poetry Festival.”

Finally, it’s going to have to renegotiate any promises it has made but just can’t keep.  And that’s the biggest budget challenge, because an entire generation of Americans has made retirement plans based on those promises.

Paul Ryan has done the nation a great service by offering an alternative that stops provider flight and guarantees seniors the choice of the health care plan that best meets their own needs, underwritten by a solvent Medicare system in a manner that provides higher support to those who are sicker, poorer and older.

Facing grim financial reality after decades of profligacy is a difficult, time-consuming and thoroughly unpleasant process.  But there’s an infinitely worse alternative.

On Tuesday, Abdelbaset Ali al-Megrahi, the only person convicted in the 1988 bombing of Pan Am Flight 103 over Lockerbie,...