The Palestinian Authority often accuses of Israel of mistreating its citizens and abusing their human rights.

A new video created by the FreeMiddleEast.com organization shows that the rights of PA Arabs are indeed being violated…by their Arab cousins in other countries, that is.

Today there are over four million descendants of Arab refugees from the 1948 war, with the vast majority residing in Lebanon, Jordan, and Syria. The video presents the facts, plain and simple:

PA leaders have demanded the ‘Right of Return – that as part of a future peace agreement Israel allow millions of Arabs descended from those who fled during the 1948 War of Independence to “return” to the cities in which their grandparents and great-grandparents once lived.

As this video suggests, however, perhaps the ‘right of return’ should be these descendants returning to be treated as human beings by their Arab cousins. 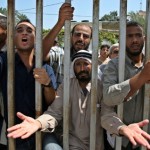 In Case You Missed It:  COERCION BY PROXY: After rushed FDA "full approval" of the covid vax, Biden calls for corporations across America to MANDATE covid vaccines for all employees
Posted in Freedoms and tagged Gaza, Israel, Jordan, Lebanon, Palestinians, Syria.

U.S. Secretary of State Hillary Clinton is blasting a proposed House bill that would impose strict new requirements on U.S....