(NY Daily)In the wake of the mass murder of 77 people in Norway by Anders Behring Breivik, there is a new chorus of voices eager to create a simple equation between “Christianist,” anti-Muslim violence and the Islamist terrorism that targets America, its allies and, indeed, Muslims around the world, including most spectacularly on 9/11. 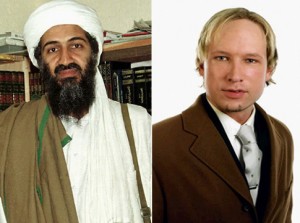 But it would be a grave mistake to overdo the comparison by exaggerating the scope of the sick, violent ideology espoused by Breivik and others like him – or by imagining broad support for his crimes in the West.

What Breivik did is, in at least one sense, the exact equivalent of the type of violence perpetrated by the late Osama Bin Laden. Breivik, like Bin Laden, committed evil acts. Like Bin Laden, his crimes were political. His fear about Muslim immigration to Europe, explained in a rambling 1,500-page manifesto, was not predicated upon a genuine concern for protecting the Continent’s liberal values; people who believe in liberal values don’t massacre teenagers. Still, he was trying to make a point – as twisted as it might be.

But that is where the easy parallels end. Breivik’s ideology does not represent the same sort of threat that Islamism does because it is not shared by nearly as many people, governments or institutions. Aside from a handful of anonymous Internet postings, there have been no avowals of support for Breivik’s mass murder. No influential Christian preachers have praised what he did. There were no celebrations in the streets, nor has any government applauded his attempt to “save” Europe from “Islamization.” The only organizational backing for Breivik’s massacre appears to have come from a 12th century crusader outfit called the “Knights Templar,” which, as far as we know, exists nowhere but in his own deranged head.

Contrast that condemnatory response with Saddam Hussein’s remarks after 9/11 – an attack carried out by a transnational terrorist organization sheltered by the then-government of a sovereign state. Saddam said that “the American cowboys are reaping the fruit of their crimes against humanity.” Crowds of Palestinians, meanwhile, took to the streets and handed out candy.

While these reactions were certainly the exception among most Muslims, smaller-scale terrorist attacks committed against coalition soldiers in Iraq and Afghanistan, and on civilians in places ranging from London to Madrid to Peshawar, Pakistan, are regularly legitimized by Islamic clerics who claim huge followings.

That support is echoed among ordinary people. A poll published this year by the Pew Global Attitudes Project found that 68% of Palestinians support suicide bombing, and that, while support for terrorism among Muslim populations has declined over the past decade, 15% of Jordanians, 22% of Indonesians and 21% of Egyptians have a positive opinion of Al Qaeda.

Moreover, there is no “Christianist” government which might blackmail the world with a nuclear arsenal, as the clerical regime in Iran may do should it acquire the world’s deadliest weapon.

The mass murderer in Norway has awakened the world to a threat. But let us not lose perspective and sloppily equate it with the widespread danger posed by Islamist terror, which finds pervasive support in far too many parts of the world.

Violent extremism of all religious hues must be combatted. But to pretend that “Christianist” ideology represents anywhere near the same menace as Islamism does is a dangerous illusion.

By PETER PATON In the current climate of deep mistrust and acrimony between the Benjamin Netanyahu-led Israeli coalition government and...