America is gripped by a wave of brutal racially motivated black on white violence. The “mainstream” media is downing everything possible to censor and downplay the crime. 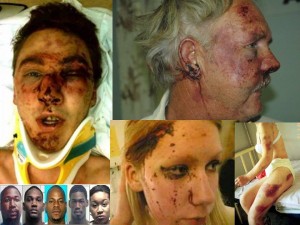 I’ve heard accounts of 200-300 black youths beating and robbing white people left and right at the opening day of the Wisconsin State Fair this week. So far the media has tried hard to say it had nothing to do with the perpetrators’ race and no mention that youths were black. Unlike week ago when Norway was attacked the media made sure everyone knew the perpetrator was a White Christian and even going as far as to describe the man’s eye color as blue.

“It looked like they were just going after white guys, white people,” said Norb Roffers of Wind Lake in an interview with Newsradio 620 WTMJ. He left the State Fair Entrance near the corner of South 84th Street and West Schlinger Avenue in West Allis.

“I had a black couple on my right side, and these black kids were running in between all the cars, and they were pounding on my doors and trying to open up doors on my car, and they didn’t do one thing to this black couple that was in this car next to us. They just kept walking right past their car. They were looking in everybody’s windshield as they were running by, seeing who was white and who was black. Guarantee it.”

Eric: “I feared for my life”

Eric, who asked Newsradio 620 WTMJ not to use his last name, talked about the incidents that happened as he, his wife and a neighbor left the fair Thursday.

“We exited at the Schlinger and 84th exit, and we walked south about a block, and then went up and got our car, came back up and around down Schlinger. When we made a left hand turn, we were stopped in traffic. I looked toward the bridge, right before you get on the freeway, and all I saw was a road full of black kids, jumping over people’s cars, jumping on people’s hoods, running over the top of them.”

Eric then claimed that he saw hundreds of young black people coming down a sidewalk.

“I saw them grab this white kid who was probably 14 or 15 years old. They just flung him into the road. They just jumped on him and started beating him. They were kicking him. He was on the ground. A girl picked up a construction sign and pushed it over on top of him. They were just running by and kicking him in the face.”
Then, Eric talked about trying to get out of the car to help the victim.

“My wife pulled me back in because she didn’t want me to get hit. Thankfully, there was surprising a lady that was in the car in front of me that jumped out of the car real quick and went over there to try to put her body around the kid so they couldn’t see he was laying there and, obviously, defenseless. Her husband, or whoever was in the car, was screaming at her to get back into the car. She ended up going back into the car. These black kids grabbed this kid off the ground again, and kicked him up over the curb while yelling all crackers should die, then put him onto the sidewalk and threw him into the bushes like he was a piece of garbage.”

In another black mod event in Chicago the same thing was happening, More black mob violence in Chicago. The “youths” are all black, the victims are white. If the races had been reversed, this would be a national news story.

Just last weekend Chicago mayor Emanuel ordered an emergency shutdown of the beaches in Chicago because mobs of blacks were terrorizing white families.

Philadelphia has had the same problems with mobs of black teenagers, who also used social networking technology, assaulting white pedestrians and vandalizing property , it a growing problem and the media has completely ignored it.

The Obama Administration’s plan to increase funding for the U.S. nuclear weapons complex has little chance to succeed under the...