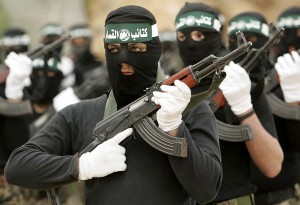 — A new poll among Palestinians indicates there’s overwhelming support for the charter of the terrorist group Hamas — a dangerous element if the Palestinians gain statehood in September.

The Israel Project found that 80 percent Palestinians support Hamas. The desire to annihilate the Jewish people is one of the main goals of the Hamas organization as per their official motto.

“Eighty percent is a very frightening number so it’s very disturbing to see these significant numbers,” Jennifer Laszlo-Mizrachi, founder and president of The Israel Project.

“But that’s still not surprising because they have been indoctrinated over generations to hate Israel and Jews,” she added.

The Israel Project is a non-profit educational organization dedicated to getting the facts about Israel and the Middle East to the press, policy leaders and the public.

Laszlo-Mizrachi says the “Arab spring” uprisings brought about change in the Middle East, but not necessarily for the good.

“The paradigm shift can be dangerous because the Muslim Brotherhood and other extremist terrorists could take over Egypt,” she explained. “For example, we saw the very dangerous situation where after Israel withdrew from Gaza that the Hamas took over Gaza.”

Even so, The Israel Project is reaching out to Palestinians through the Internet and Facebook in an attempt to convince them that peace with Israel is in their best interest.

“Economic stability and jobs is the number one thing that Palestinians want. Peace with Israel is good for Palestinian jobs and for a better future. So we have to convince them and they have to see for themselves that a shared future is not only important for Israel’s security, but also for Palestinian prosperity and peace,” Laszlo-Mizrach explained.

The poll results also revealed many other contradictions:

Palestinians wanting one state not two:

A denial of Jewish history in Jerusalem

A call for jihad

However, they are against firing rockets at Israeli civilians and favor peace talks with Prime Minister Benjamin Netanyahu.

Veteran pollster Stanley Greenberg says such results are not uncommon.

“I don’t think they feel they have to resolve these contradictions because life is not changing very much,” he said.

But he says as long as the Palestinian leadership doesn’t deal with these attitudes, there won’t be a peace agreement.

“The big issues have not been addressed. You’re not going to get an agreement unless there’s change from Palestinian opinion from where it is now. But that requires leaders that say one state’s not possible. We know that,” Greenberg said.

(La Rouche)This week, under the influence of a terror campaign by Obama and his British and Wall Street backers, a...